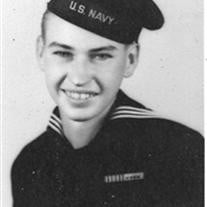 MANSFIELD -- Isaac Edwin Newberry, Jr. died peacefully in Mansfield on April 27, 2008 after a short illness. A memorial service will be held at 2 p.m. Monday, May 5, 2008 at St. John Lutheran Church, 1218 East Debbie Lane, Mansfield. In lieu of flowers, memorials may be made to the St. John Lutheran Church building fund. The family would like to extend a special thanks to the ICU staff at the Methodist Mansfield Medical Center for their excellent care. He was born January 15, 1927 in Brownfield, Texas to Isaac and Mary Newberry. Ed served in the U.S. Navy in the Pacific during World War II. Upon leaving the Navy, he worked for a short time as a baker, before beginning his lifelong career as a can maker. He worked for Continental Can Company for 16 years before joining the Carnation Company Can Division in 1966. He moved to Mansfield in 1969 to open the new plant on East Broad Street, where he worked until his retirement in 1987. Ed was an incredible engineer. What he lacked in formal schooling he more than made up for in sheer ingenuity. There was little that he couldn't fix or build from the ground up. He spent his retirement years enjoying his grandchildren, playing golf, tinkering in his workshop, tending his garden and mowing his beloved pasture. He was preceded in death by his parents, and his sisters, Lois Strickland and Paula Jones. And now abide faith, hope, love, these three; but the greatest of these is love. - 1 Cor. 13:13 He is survived by his devoted wife of 58 years, Winona, daughter Pamela Newberry (Michael Gillin) of Bellaire, TX, son Jeffrey Newberry of Mansfield, daughter Jan Alison (George) Newberry-Davis of Lawton, OK and eight grandchildren: Donesh Gillin, Kate (Kyle) Sommers, Benesh Gillin (Alicia Ester), Adam Newberry (Brittani Gordon), Emma Newberry-Davis, Olivia Newberry, Andrew Newberry-Davis and Meredith Newberry. He is also survived by sisters June Burnett of Harrison, AR and Patricia Waltz of Port Townsend, WA, as well as by many nieces and nephews.

The family of Isaac Newberry, created this Life Tributes page to make it easy to share your memories.