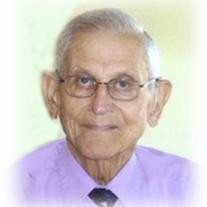 J. Willard Grisbee FORT WORTH -- J. Willard Grisbee died peacefully at his home Thursday afternoon, July 21, 2011, early in his 86th year. Service: 1 p.m. Monday at Harvest Assembly of God, 7501 Crowley Road, with his son-in-law, the Rev. Dale Shorter, and the Rev. Paul Clark officiating. Following a committal service at 1 p.m. Tuesday, Willard will be laid to rest next to his wife, Naomi, in Prairie Lea Cemetery, Brenham. Visitation: Family and friends will gather to share laughter and tears 3 to 5 p.m. Sunday in the Great Room at Robertson Mueller Harper. Memorials: In lieu of usual remembrances, consideration of expressions to Light for the Lost missions through lftl.ag.org/contributions or to Harvest Assembly of God, in thee Rev. Grisbee's memory, is suggested. Born July 7, 1925, in the Addicks-Fairbanks community, Jesse Willard was the son of William Henry and Hulda Hoffmeister Grisbee. He was graduated from Cy-Fair High School in 1942 before attending Central Bible Institute in Springfield, Mo. Willard was an ordained Assemblies of God minister for 58 years. He along with his wife, Naomi, pastored churches in Guntown, Brookhaven, Natchez and Glen Allen, Miss., and Brenham, Port Neches, Pasadena and Columbus, Texas. Upon retiring, he moved to Fort Worth and became senior adult pastor at Harvest Assembly of God. He will be remembered as a wonderful Bible teacher, a true gentleman and for his strong faith in Jesus Christ. His wife, Naomi Ruth Morrow Grisbee, preceded him in death in 2007. Survivors: In addition to his sons, Marcus Gayle Grisbee and his wife, Nancy, of Sugar Land and Gary Wayne Grisbee of Shawnee, Okla., Willard is survived by his daughter, Gilda Grisbee Shorter and her husband, Dale, of Fort Worth; grandchildren, Zach and Alaina Grisbee, Jeremy and Amy Grisbee and Dayla and Dayton Shorter; great-grandchildren, Ian and Iris Grisbee; and sister-in-law, Jenny Grisbee of Cat Springs. Robertson Mueller Harper Funerals & Cremations 1500 Eighth Ave., 817-924-4233

The family of J. GRISBEE created this Life Tributes page to make it easy to share your memories.