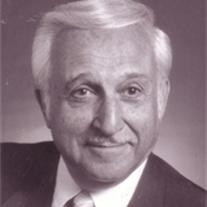 FORT WORTH -- Jack Solomon Howard, 91, a beloved husband, father and grandfather, died peacefully Thursday evening, Dec. 4, 2008.        Funeral: Noon Sunday in the Kornbleet Memorial Cemetery Chapel, 411 N. University Drive. Rabbi Alberto "Baruch" Zeilicovich and Dr. Javier Smolarz, ritual director, will officiate at the religious service. Military honors will be held by Jewish War Veterans, Martin Hochster Post #755 with Masonic services to follow under the auspices of Cooke-Peavy Lodge #1162, A.F. & A.M. Following committal prayers, Jack will be laid to rest in Ahavath Sholom Cemetery. Bearers of his casket will be his son-in-law, Rick Chaviers, and his grandsons, Howard Mann, David Behr and Ryan Howard. Honorary bearers will be Paul Nudleman and Sam Reznikoff. Minyan services will be held Sunday at Congregation Ahavath Sholom, beginning at 6 p.m.        Memorials: In lieu of flowers, consideration of contributions to Congregation Ahavath Sholom, the Scottish Rite Hospitals for Children or a charity of one's choice, in Jack's memory, is suggested.        A native of Brooklyn, N.Y., Jack was born Sept. 25, 1917, the son of Joseph Bernard and Anna Gottlieb Hirshowitz, a poor family from New York. He worked from the age of 5, often bringing home only a nickel as pay.        Jack loved his country and proudly served it during World War II as a member of the U.S. Army. He and his family moved to Fort Worth in 1953 to begin his mission of becoming a successful businessman. During the 1960s, Jack started a men's clothing store called Jack Howard's Men's Wear, which he operated until retiring. He was a community server and a great people person. He helped the needs of children by working with the Scottish Rite Hospital, helping and saving the lives of burned and crippled children.        Jack had a deep religious faith and was a longtime member of Congregation Ahavath Sholom and B'nai B'rith. He was a member of the Jewish War Veterans, Martin Hochster Post #755.        He was raised a master Mason in 1959 and was a member of several lodges, Tarrant Chapter #416, RAM, Tarrant Council #349 R&SM, Moslah Temple Shrine, the Fort Worth Scottish Rite Body, as a charter member and was one of the first to become an endowed member of the Fort Worth Scottish Rite body. He was a degree master of the 23rd degree for over seven years and was invested with Knights Commander of the Court of Honour in 1971. Jack was coroneted with the 33rd degree in 1985.        Survivors: His wife of 62 years, Irma Leff Howard; daughter, Lynn Howard Chaviers and her husband, Rick, of Denton; son, Gary Howard and his wife, Shoshana, of Crowley; grandchildren, Howard Michael Mann and his wife, Sherry, and their sons, Michael and Grayson, Heidi Michell Prellwitz and her husband, Marty, and their son, Gavin, Brandi Iris Kaplan and her husband, Loren, and their sons, Joseph and Jacob, Heather Howard Behr and her husband, David, and their daughters, Jordyn and Eden, and Ryan Howard; brother, Henry Hirsch of Florida; and several nieces and nephews and their families. Robertson Mueller Harper Funerals & Cremations 1500 Eighth Ave., 817-924-4233

The family of JACK HOWARD created this Life Tributes page to make it easy to share your memories.