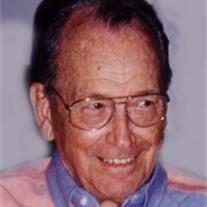 FORT WORTH -- Jack Vernard Staples, 98, died peacefully Friday morning, May 22, 2009, at home, surrounded by his loving family, just four days shy of his 99th birthday.        Memorial service: 11 a.m. Thursday in the sanctuary of First United Methodist Church of Fort Worth, 800 W. Fifth St. The Rev. Dr. William Longsworth, retired senior associate, will officiate. Following military honors at 1:30 p.m., Jack's cremated remains will be placed in the columbarium at Dallas-Fort Worth National Cemetery. Visitation: Family and friends will be received in Wesley Hall immediately following the church service.        Memorials: In lieu of flowers, consideration of contributions to a charity of choice in suggested.        Born in Marshall on May 25, 1910, Jack was the son of Carroll William and Willie Mead Staples. He attended St. Joseph's Academy, East Marshall Public School and Marshall High School. He attended the University of Texas at Austin. In 1929, while working his way through college, Jack went to work after his class and found the doors permanently locked. He returned to Marshall and ultimately found employment at the Post Office and joined the National Guard in 1933.        Prior to joining the U.S. Army in 1939, Jack married the love of his life, Nancy Lee Bates. The couple had a son, John, in 1943.        During World War II, he was in charge of the Army Postal School in West Chester, Pa., and was on Gen. Douglas MacArthur's staff in the Pacific. After the Japanese surrendered, he was part of the Allied Occupational Force in Japan.        Following the war, he returned to the Post Office Department and was commissioned as a postal inspector. Jack was appointed postal inspector in charge of the Texas and Louisiana division, a position he held from 1962 through his retirement in 1971. While in this position, he was involved in the investigation of the assassination of President John F. Kennedy.        After he retired, Jack and Nancy traveled and enjoyed a special kind of togetherness. He also enjoyed his sculpting and art classes and became quite a baker. There was always fresh bread in the house.        Jack will be remembered for his generous nature, his love of poetry and people. He had learned to fly-fish when he was stationed in Pennsylvania during the first part of the war and continued to do so well into his 80s. Those who knew him best can still see his smile and remember his sound judgment and his kind and generous demeanor.        He was preceded in death by his parents; one sister, June Barry; and three brothers, Mead Staples, Carroll William Staples Jr. and Nelson Crowles Staples.        Survivors: In addition to his wife, Nancy, whom he would have celebrated 70 years of marriage with Sept. 16, 2009, and his son, John, Jack is survived by his daughter-in-law, Marilyn; grandchildren, Andrew Latham Staples and Meredith Staples; brothers, John Crowles Staples, Lawrence Ray Staples and Gene Glenn Staples; sister, Alice Regina Nesbitt; and nieces, nephews and their families. Robertson Mueller Harper Funerals & Cremations 1500 Eighth Ave., 817-924-4233

The family of JACK STAPLES created this Life Tributes page to make it easy to share your memories.