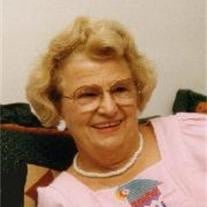 ???FORT WORTH -- Jean Laurie Jones, 83, a loving mother and grandmother, died peacefully Friday afternoon, Jan. 6, 2006, in the hospice unit of a local hospital. ??? Memorial service: 4 p.m. Monday in the Chapel of the Holy Trinity at St. Stephen Presbyterian Church, 2700 McPherson Ave. The Rev. Dr. Frederick Field Ritsch III will officiate. ??? Memorials: Mrs. Jones' family suggests that, in lieu of flowers, friends may honor her memory by making contributions to the Alzheimer?s Association of North Texas, 101 Summit Ave., Fort Worth 76102. ??? It is with tremendous sadness that the family of Mrs. Charles Clinton Jones Jr. announces her death on Jan. 6, 2006, one day short of her 84th birthday. ??? Mrs. Jones was born Jean Laurie Davidson on Jan. 7, 1922, in Brisbane, Australia, and was a longtime resident of Kerrville. She had moved to Fort Worth in 2000 in order to be closer to her children. ??? Jean met her future husband, Dr. Charles Clinton Jones Jr., during World War II, in Townsville, Australia, where Jean, a member of the Royal Australian Air Force (RAAF), was stationed. Dr. Jones, "Charlie," was serving as a captain in the United States Army Medical Corps. They were married on May 26, 1945, in Brisbane. Shortly thereafter, Dr. Jones returned to the United States, where he resumed his medical practice in Kerrville. ??? Jean remained in Australia for several months until the United States government provided passage to America on the Mariposa. The ship, filled with newly-married brides and mothers with babies, endured a harrowing crossing. ??? Reflecting on the departure from Sydney Harbor, Jean later recalled the sadness and tears that prevailed when the families of the women and children came down to the shipyard to bid farewell. Jean described it as "one long, loud wail" as the passengers clamored to find a portal to wave goodbye. It was a rough voyage with turbulent seas and chronic seasickness until the ship finally docked in San Francisco. ??? Dr. Jones had driven from Texas to meet his new bride, but, because of a threatened dockworkers? strike, the Mariposa arrived a day earlier than expected. The ship was unloaded and the passengers were assigned to wait with their alphabetically- arranged luggage. Jean reminisced about not being certain if she was a "D" or a "J." ??? Fortunately, Dr. Jones found Jean in a timely fashion, and she was always an avid supporter of the American Red Cross because of the aid they provided for these new arrivals. Some of them were not met by spouses and eventually had to return to Australia. ??? After Jean and Charlie Jones took up residence together in Kerrville, Jean assimilated into American society and enjoyed being the devoted wife of a busy young physician, often helping in the office. They had four children, and despite Jean?s attention to their academics and extracurricular activities, she found time to enjoy a wide range of interests. She was an active member of the Women?s Medical Auxiliary, the First United Methodist Church, where she assumed various leadership roles and taught Sunday school, and was a former president of the Garden Club. ??? Gardening, in fact, was one of her passions and special talents. She was very artistic and thoroughly enjoyed painting and sketching. She was extraordinarily skilled in sewing, knitting and needlepoint and was an ardent bridge player. Her "bridge club" spanned over 30 years. ??? Jean cherished her friends, as well as her family, and will be remembered for her quiet demeanor, unflagging Australian accent, quixotic sense of humor and easy laugh. ??? She was preceded in death by her husband of 51 years, Dr. Charles Clinton Jones. ??? Survivors: Her children, Laurie Jones Childs, Charles Clinton Jones III, Judy Jones Schell and Dorothy Jones Vollmer; and nine grandchildren. Robertson Mueller Harper Funerals & Cremations 1500 Eighth Ave., (817) 924-4233

The family of JEAN JONES created this Life Tributes page to make it easy to share your memories.