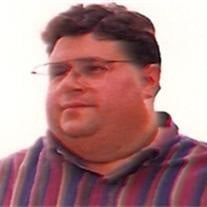 FORT WORTH -- Jerome Stewart "Jerry" Lamensdorf, 46, died Sunday, Sept. 28, 2008. Funeral: 3 p.m. Monday, Oct. 6, in the sanctuary of Beth-El Congregation, 4901 Briarhaven Road. Rabbi Ralph Mecklenburger will officiate. Following committal prayers, Jerry will be laid to rest in the Beth-El Section of Greenwood Memorial Park. Bearers of Mr. Lamensdorf's casket will be Brad Lamensdorf, Jonathan Lamensdorf, Dr. George Shoshoua, Don Blate, Kevin Blate, Richard Blate, Ron Blate and Victor McCall Jr. Visitation: His family will receive friends at the residence on Monday with a minyan service beginning at 6 p.m. Memorials: In lieu of flowers, consideration of contributions to Beth-El Congregation, 4901 Briarhaven Road, Fort Worth, Texas 76109, or the the Jewish Federation of Fort Worth and Tarrant County, 4049 Kingsridge Road, Fort Worth, Texas 76109, in Jerry's memory, is suggested. Jerome Stewart Lamensdorf was born June 27, 1962, in Jackson, Miss. He moved to Fort Worth with his family in 1966. Jerry graduated from Fort Worth Country Day School and Tulane University, and attended law school at Texas Tech University. He had a keen eye for detail and loved history, sports and film. He continually amazed his friends and family with his depth of knowledge of sports teams, players, historical events and movies. He could recall any sports statistic. He was an avid Texas Rangers and Dallas Cowboys fan and attended many Rangers games throughout his life. Jerry was a thoughtful and caring son, brother, uncle and brother-in-law. He always had the perfect gift and thought about everyone above himself. All who met him instantly knew he was a special and caring person. His great sense of humor showed how clever he truly was and made many a family event. He will be greatly missed. Survivors: Jerry is survived by his parents, Hugh and Louise Lamensdorf; his brothers, Brad Lamensdorf and his wife, Julia, and Jonathan Lamensdorf and his wife, Sarah; his sister, Marilyn Lamensdorf Shashoua and her husband, George; his nephew, Nathan Shashoua; and his nieces, Sally Shashoua and Lola Lamensdorf. Robertson Mueller Harper Funerals & Cremations 1500 Eighth Ave., 817-924-4233

The family of JEROME LAMENSDORF created this Life Tributes page to make it easy to share your memories.