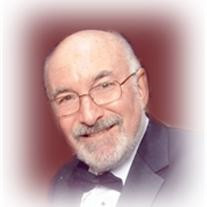 FORT WORTH -- Jerome Ira "Jerry Weiner passed away Sunday, April 22, 2012, during his 69th year. Service: 10:30 a.m. Wednesday in the sanctuary of Beth-El Congregation, 4900 Briarhaven Road, with Rabbi Ralph Mecklenburger officiating. Following committal prayers, he will be laid to rest in the Beth-El Section of Greenwood Memorial Park. Shiva and minyan services will be held on Wednesday at the Weiner residence, beginning at 6 p.m. Memorials: In lieu of flowers, consideration of contributions to the Jewish Education Agency, Beth-El Congregation or to the Lions Club, in Jerry's memory, is suggested. Born in Patterson, N.J., on Feb. 21, 1943, Jerry was the son of Jess and Dorothea Slavin Weiner. He and his wife, Sylvia, made their home in Fort Worth for 45 years, moving here in 1966 to work at General Dynamics. After leaving GD, Jerry became a partner in B&H Amusement Rides, a manufacturing company. He later started an aerospace consulting firm, which then branched off into three travel agencies to cover the "slow" season. The tail wagged the dog, and Jerry split off the consulting firm with his partner, Don Dudas, off he and Sylvia went a-traveling and never stopped. Jerry was a member of Beth-El Congregation and past president of the Beth-El Brotherhood. He also served as president of the Dan Danciger Jewish Community Center and the South Side Lions Club, where he served as chairman of "Sight Conservation," arranging for free eyeglasses for children, and chaired the club's children's Christmas parties. He was a member of the Harvard Business School Club and the Educational Advisory Board of MIT, where he interviewed perspective students. Throughout the years, Jerry helped many friends, and quite a few strangers, through tough times quietly and without fanfare. Survivors: In addition to his wife, Sylvia, Jerry is survived by his daughters, Melissa Weiner and Jennifer Weiner Rosser and her husband, Rob; grandchildren, Ethan and triplets, Alexander, Benjamin and Cameron Rosser; brother, Robert Weiner and his wife, Pat, of Accokeek, Md.; and several cousins. Robertson Mueller Harper Funerals & Cremations 1500 Eighth Ave., 817-924-4233

The family of JEROME WEINER created this Life Tributes page to make it easy to share your memories.