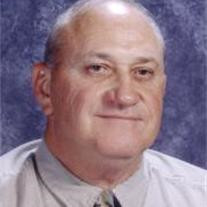 FORT WORTH -- Jerry Dean Jones, 61, a loving husband, father, brother, uncle and friend, died peacefully Monday morning, May 21, 2007. Memorial service: 1 p.m. Saturday in the chapel at Robertson Mueller Harper. Visitation: His family will receive friends from noon until 1 p.m. Saturday. Memorials: Consideration of contributions, in lieu of flowers, to a charity of one's choice, in memory of Jerry, is suggested. Born on June 12, 1945 in Oxnard, Calif., Jerry was the son of William H. and Era Hale Jones. He grew up in Abilene and graduated from Abilene High School. On football scholarships, Jerry attended Ranger Junior College, Texas Western College, now the University of Texas at El Paso, and graduated from Tarleton State University; later playing semi-pro football in Monterrey, Mexico, Odessa and Fort Worth. His football and track high school coaching career took him to Hamilton, Ferris, Slaton, Robstown, Lubbock Cooper and Everman. He will be remembered as a big man with a huge heart, who loved his family, travel and food - and taking photos of all of them. His football players and students will recall his use of "Colorado" to mean whatever fit the situation. He was known for his integrity and honesty; a man who loved to tell stories and enjoyed a good laugh. In addition to his parents, Jerry was preceded in death by his sisters, Hazel Lofland and Wilma Andrews and his brother, Cecil Jones. Survivors: Wife, Mary S. Jones; daughters, Julie Jones Rice and her husband, Scott of Fort Worth, and Betsy Jones of Dallas; sister, Peggy Shoemaker and her husband, Joe of Colorado City; brother, Allen Jones and his wife, Dorothy of Abilene; numerous loving and special nieces and nephews; his faithful dog, Miles; and many former players and students.Robertson Mueller Harper Funerals & Cremations 1500 Eighth Ave., 817-924-4233

The family of JERRY JONES created this Life Tributes page to make it easy to share your memories.