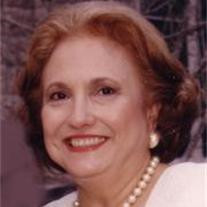 FORT WORTH -- JoAnn Gish Woodson, 70, a loving wife, mother and grandmother, died Tuesday afternoon, Nov. 27, 2007. Funeral: 10:30 a.m. Friday at St. Andrew's Episcopal Church. Following the church service, JoAnn will be laid to rest in Greenwood Memorial Park. Memorials: Consideration of contributions to a charity of one's choice, in JoAnn's memory, is suggested. JoAnn was preceded in death by her parents, William and Olive Gish, and her sister, Eileen Frame. Born Aug. 2, 1937, in Chicago, Ill., she graduated salutatorian from high school and cum laude from the University of Illinois. Above all else JoAnn was a kind and warm-hearted woman who cherished most her family and close friends. She was unselfish to the point of always putting others' concerns and interests as higher priorities than her own. She was a devout Christian and her unconditional love of so many was a hallmark of her character. Her positive demeanor and cheerful attitude were known by many as an uplifting force. From early adulthood her passion was gourmet cooking and entertaining. Survivors: Husband, Samuel Patrick Woodson III of Fort Worth; sons, Douglas James Woodson and his wife, Nancy, S. Patrick Woodson IV and his wife, Carrie, all of Fort Worth, and Chad Woodson and his wife, Wendy, of Dallas; grandchildren, Bailey Marie, Douglas James Woodson Jr., Lawrence Elizabeth, Olivia Chandler and Samuel Patrick Woodson V; and niece, Bonnie Moore and her husband, Stan. Robertson Mueller Harper Funerals & Cremations 1500 Eighth Ave., 817-924-4233

The family of JOANN WOODSON created this Life Tributes page to make it easy to share your memories.