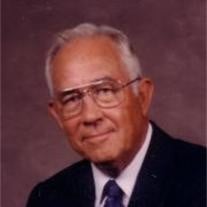 John Patrick was born Aug. 11, 1918, in Miami, Okla., son of the late Ray and Ruth Marie Malone McNaughton. He was a graduate of the University of Oklahoma, where he was a member of Sigma Nu Fraternity, and the Colorado School of Mines. John served in the U.S. Army during World War II and attained the rank of major before being honorably discharged. On Aug. 23, 1941, he was united in marriage in Miami, Okla., to the love of his life, Bettye Lee Robinson, his best friend whom he had known since birth. John and Bettye moved to Fort Worth from Washington, D.C., in 1953 to work for Neville Penrose in the petroleum industry. A petroleum engineer and geologist, he was past president of Energy Resources as well as the El Ray Petroleum Co. John was very active in the Baptist community and was well known in Baptist leadership circles. He served on the boards of directors for several organizations, including the Southwestern Baptist Theological Seminary, B.H. Carroll Theological Institute and the Buckner Benevolence Board, where he was later recognized as trustee emeritus. His love for helping children was apparent through his work with the International Student Ministry. Past presidencies included the Child Study Center and Easter Seal Society. "Jack," as he was affectionately called, was a proud member of the Peoria Indian Tribe of Oklahoma and was a true rancher at heart. After retiring, he and Bettye split their time between their home in Fort Worth and their ranch in Alvarado. Survivors: Wife of 65 years, Bettye Lee Robinson McNaughton; children, Linda McNaughton Burton and her husband, Larry, of Houston, John Allen McNaughton and his wife, Carolyn, of the J M Bar Ranch and LeeAnn McNaughton Hayes of Oklahoma City; grandchildren, Patrick Burton, Tim Burton and his wife, Courtney, Chris Burton and his wife, Laura, John Allen McNaughton Jr. and his wife, Mia, Allison McNaughton Edmonds and her husband, Brian, and Maddye Lee Hayes: and great-grandchildren, Jake and Kylee Burton, Carley Burton, John Allen McNaughton III and Cara Rylee Edmonds. Robertson Mueller Harper Funerals & Cremations 1500 Eighth Ave., 817-924-4233

John Patrick was born Aug. 11, 1918, in Miami, Okla., son of the late Ray and Ruth Marie Malone McNaughton. He was a graduate of the University of Oklahoma, where he was a member of Sigma Nu Fraternity, and the Colorado School of Mines. John... View Obituary & Service Information

The family of JOHN McNAUGHTON created this Life Tributes page to make it easy to share your memories.