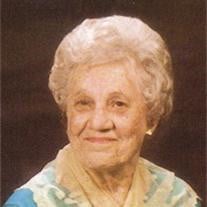 FORT WORTH -- Juanita Irvine Cowan died peacefully Saturday morning, Dec. 12, 2009, in her 102nd year.        Service: 11:30 a.m. Tuesday at St. Stephen Presbyterian Church, 2700 McPherson Ave. The Rev. Dr. Frederick Field "Fritz" Ritsch III, pastor of the church, and Mr. Mark Scott, minister of music, will officiate. Following a committal service at 10 a.m. Tuesday, Juanita will be laid to rest with her family in Shannon Rose Hill Cemetery.        Memorials: In lieu of flowers, consideration of contributions to St. Stephen Presbyterian Church, 2700 McPherson Ave., Fort Worth, Texas 76109, in Juanita's memory, is suggested.        Born March 8, 1907, in Fort Worth, Juanita was the daughter of Donald and Verna May Hovey Cowan. She was the second of six daughters and one son.        Juanita was a professor of Spanish, English and French at Texas Wesleyan College, as well as sponsor of various organizations from the 1930s until 1962. She joined the Austin College faculty teaching Spanish and sponsoring student organizations until she retired in 1972.        While in Sherman, she was an elder at First Presbyterian Church. At St. Stephen Presbyterian Church in Fort Worth, she was an active member of the Women of the Church and president of Presbyterian Women. Juanita was also an active member of Altrusa Club of Fort Worth, Business and Professional Women and the University Place Book Club.        Always taking pride in her Scottish Presbyterian heritage, she loved to write personal articles for the church newspaper and her Sunday school class, the Fisher Class at St. Stephen, which was her special love in her later years.        Juanita devotedly cared for her sisters until their deaths, asking her doctor to keep her healthy for them. She was preceded in death by her parents, all of her sisters, her brother and all of her beloved cousins of "The Cousins Club."        Survivors: In addition to her sister-in-law, Dr. Louise Cowan of Dallas, Juanita is survived by her niece, Peggy Kennedy and her husband, Troy, of Fort Worth; her nephews, Bill and Kenny Duran of Fort Worth, David Duran and his wife, Rolinda, of Dallas and Dr. Brainard Cowan and his wife, Christine, of Irving; and many great and great-great nieces and nephews, including Nicole Kennedy, Katie Kennedy Hinckley and her husband, Greg, and their daughters, Trinity, Emory and Addison, and Alexandria Duran and Madelyne Duran, all of Fort Worth. Robertson Mueller Harper Funerals & Cremations 1500 Eighth Ave., 817-924-4233

The family of JUANITA COWAN created this Life Tributes page to make it easy to share your memories.