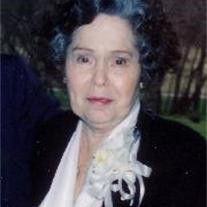 ???FORT WORTH -- Juanita Jessie "Nita" Dalton Koch, 94, a loving mother, grandmother, great-grandmother, sister and aunt, died Thursday, June 22, 2006, surrounded by her family. ??? Graveside service: 10 a.m. Monday, with the Rev. Georgia Orr and the Rev. Paul Coleman officiating. Burial: Nita will be laid to rest next to her husband, Carl, in Greenwood Memorial Park. Visitation: She will lie in state Sunday in the Great Room at Robertson Mueller Harper; her family will receive friends 3 to 5 p.m. ??? Memorials: Mrs. Koch's family suggests that, in lieu of flowers, friends may honor her memory by making contributions to Universal Hospice and Palliative Care Facility, Fort Worth. ??? Nita was born in Mansfield on Jan. 17, 1912, the proud daughter of Mr. and Mrs. J.O. Dalton, founders of Dalton's Best Maid Products. Her early years were spent in Mansfield before the family moved to Fort Worth. ??? While attending Central High School, now R.L. Paschal, she met the love of her life, Carl H. Koch. During the Depression, having dated for three years, they decided it would be better to be poor together rather than poor and apart. The couple married Nov. 15, 1931. Together they enjoyed dancing, plays, summer musicals, family outings and spending time at their Possum Kingdom Lake cabin. The Kochs were married for 62 wonderful years before Carl's death in 1993. ??? Nita's ultimate goal in life was to provide the perfect, loving home for her husband and son. She took pride in her Dalton family heritage and even at the end of her life, she could remember, with remarkable accuracy, the family history. ??? For 37 years, one of her greatest joys in life was having her self-proclaimed adopted son, Burt Grant, style her hair. She also looked forward to her gossip and laughter sessions with manicurists Laverne Parker and Verlene Peznell at Burt's salon. ??? Family members wish to express their deep gratitude to those who gave Nita such loving, tender care during her last years, caregivers, Roma Saunders, Wanda Patrick, Jennifer Gipson and Pat Shell. They also want to thank the doctors and staff at North Hills Hospital and Universal Hospice and Palliative Care Facility for their care and support. A special note of appreciation goes to Debbie Jones, LSW, for her guidance and help during this difficult time. ??? Survivors: Son, Carl A. Koch and his wife, Linda; grandchildren, Kimberly Jill Taylor and Robert H. Koch; great-grandchildren, Christopher and Julia Taylor and Makenzie and Katlynn Koch; brother, Garland "Son" Dalton; and several nieces and nephews. Robertson Mueller Harper Funerals & Cremations 1500 Eighth Ave., 817-924-4233

The family of JUANITA KOCH created this Life Tributes page to make it easy to share your memories.