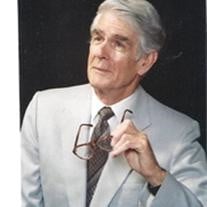 HURST -- Jack C. Carmichael, 85, a beloved husband, father, grandfather, great-grandfather and friend, passed away Sunday, October 18, 2009 after a lengthy illness.        Memorial service: 10am Saturday, St. Stephens Episcopal Church in Hurst. Memorials are requested to ones charity of choice.        Jack was born February 23, 1924 in Bosque County to Chasteen Carmichael and Jeanette Deen Carmichael. He was raised in Miami, Texas and served in the United States Navy during World War II as a pharmacist's mate in the Pacific. Jack met the love of his life, Jean Rhinehart, at Texas Technological College after the war. They married January 24, 1947. Married 62 years, they were blessed with four children. Jack graduated from Texas Tech with a degree in Dairy Manufacturing and worked for the Borden Company in Midland. In 1954, he relocated to Arkansas where he accepted a job working in dairy production sales and service throughout the southeastern United States. Much of his success in this field was due to his ability to treat customers as family.        He and his family moved to Hurst in 1960 and he continued the same business pursuits until his retirement in 1989.        Jack was very active in church life. He and Jean were origiinal members of St. Stephens Episcopal, where he served as the first Senior Warden, became a lay reader and was active in Cursillo. Jack was avid outdoorsman. He taught his children a love and respect for nature and how to safely hunt and fish. In 1970 he bought acreage in Jack County, where he and Jean spent many happy hours in their retirement years building fences, fishing, hunting and having fun with the grandkids on the ATV.        The family wishes to extend a special thanks to Dr. Barry Alldredge for his kind and loving care and also Heartland Manor Care and Heartland Hospice.        Survivors: wife, Jean; children, Beverly Lipski and husband, John, Nancy Wooten and husband, Jonathan, John Carmichaael and wife, Kathy, James Carmichael, and wife, Karla; grandchildren, Tia Russell and husband, Donnie, Kimberly Carmichael, Kaity Carmichael, Michael Lipski, Ursla Lipski and Ian Carmichael; great-granddaughter, Anabelle Russell; sister, Frances Deen Maddox; nieces and nephews, Ellizabeth, Susan and Bob Maddox, Bill and Tom Reed; close family friend, Kelly Johnson; life long friend, Canara Carruth.

The family of Jack Carmichael created this Life Tributes page to make it easy to share your memories.