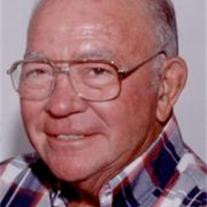 MIDLOTHIAN -- James Bolling Eldridge, 85, passed away on Monday, Oct. 22, 2007, at his residence. Memorials: In lieu of flowers, the family requests donations be made to Lighted Pathways Hospice, Box 43731, Seven Points, Texas 75143. James was born in Waco on Dec. 17, 1921 and was the baby of 10 children. He lived most of his life in Fort Worth. He graduated from Polytechnic High School in 1939 and Texas A&M University Class of 1944. He served in the U.S. Navy from 1942 to 1947 as a pilot and retired from the Navy, attaining the rank of lieutenant commander. He was stationed in Perth, Australia, where he met and married Zena May Cable. James had resided in Ellis County since 1958 and operated a dairy farm until his retirement in 1971, when he began a beef cattle operation. He enjoyed return visits to Australia and to Texas A&M football games and was an endowed member of the 12th Man Foundation. James was preceded in death by his wife of 61 years, Zena May Eldridge; grandson, Colton Eldridge; and nine siblings. Survivors: Children, Carol Terry and husband, Rick, of Arlington, Ken Eldridge of Dallas, Robin Nurdin and husband, Mark, of Fort Worth and Mark Eldridge and wife, Charlyn, of Arlington; grandchildren, Mariann Rogers, Todd Terry, Jamey and Derik Justice, Tyler and Hunter Nurdin and Creighton and Caleb Eldridge; great-grandchildren, Jordan and Jake Justice and Samantha Bell; and numerous nieces and nephews.

The family of James Eldridge created this Life Tributes page to make it easy to share your memories.