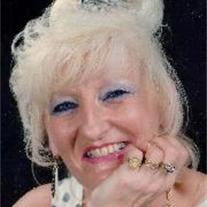 ???EVERMAN -- Janet Wallace Hamrick, 57, passed away peacefully at her home on Thursday, January 12. ??? Funeral: 2 p.m., Monday at Blessing Colonial Chapel, 401 Elm St., Mansfield. Burial: Everman Cemetery. Visitation: 3 to 5 p.m., Sunday at Blessing Funeral Home. ??? Janet was taken from her loved ones after a long battle with cancer. She grew up in the UK and moved to Texas approx. 20 years ago. Jan is a long time employee of Minyard?s Food Store in Ft. Worth.Janet and her family would like to extend a special thank you to Dr. Ruxer and his staff, and also to the staff of VITAS Hospice. ??? Janet?s parents, Reginald and June Elliott, of the UK, and her sister-in-law and friend, Sandra Elliott, of the UK, preceded her in death. ??? Survivors: She leaves her husband, Carlton Hamrick; two sons, Darren Webb, and wife, Missy, of Mansfield, and Dean Webb, and wife, Jennifer, of Burleson; seven grandchildren, Justin, Tony, Laurna, Britton, Kayla, Bailey, and Brandon; two brothers, Graham Elliott, of the UK, and Ian Elliott, and wife, Jane, of the UK.

The family of Janet Hamrick created this Life Tributes page to make it easy to share your memories.