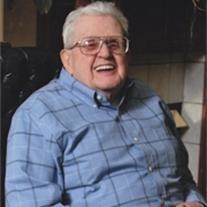 John Gerald "Jerry" Davis, 87, passed away Saturday, January 1, 2011, in a local assisted living center.        A service will be held at 11 a.m. Tuesday in Lucas Keller Funeral Home. An additional service will be 1 p.m. Thursday, January 6, in Camp Okoboji Chapel near Spirit Lake, Iowa.        Following this service Jerry will be laid to rest beside his wife, Lois, in Memorial Gardens Cemetery, Spirit Lake, Iowa.  Services Iowa will be under the direction of George Boom Funeral Home in Sioux Falls, South Dakota, 605-336-1454.        Jerry was born January 9, 1923, in Platte County, Nebraska, to Clyde and Berniece Mottles Davis. Jerry proudly and honorably served his country during World War II in the U.S. Army.        He and Lois Bolton were married in 1947. They moved to McCook, NE in 1948 and reared their family there. They were active in Peace Lutheran Church from 1948-2002. They moved to Sioux Falls in 2004. Jerry was active in Christ Lutheran Church, the American Legion and the V.F.W.        Jerry was preceded in death by his wife, Lois and a son, John Robert Davis.        Jerry is survived by sons, Clyde Davis and wife, Mari, Philip Davis and wife, Sue, Rev. Timothy Davis and wife, Tami, James Davis and wife, Connie and Steve Davis and wife, Cindy; daughters, Pamela Haase and husband, Steve and Carmen Stephen and husband, Kent; 24 grandchildren and 9 great-grandchildren.

The family of John Davis created this Life Tributes page to make it easy to share your memories.