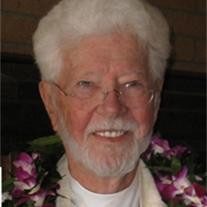 LAKESIDE -- John Keene, 90, an Episcopal priest, died Thursday, May 26, 2011, in the arms of his wife, Jeanneane, at a hospice in Fort Worth.        Memorial service: 1 p.m. Saturday, June 4, with Honor Guard at St. Christopher Episcopal Church, 3550 SW Loop 820, Fort Worth.        Memorials: Flowers are not permitted in the church. Donations can be made to St. John Evangelist Episcopal Church, N. Main St., Eagle Butte, S.D. 57625; Episcopal Church Parker County, 2 Dean Drive, Aledo, Texas 76008; St. Christopher Episcopal Church, 3550 SW Loop 820, Fort Worth, Texas 76133; or a group of choice.        The Rev. John Keene was born Aug. 31, 1920, in Hackensack, N.J., oldest of four boys. His father was laid off during the Great Depression. A highlight at Christmas was getting an orange and apple. John worked part-time at a bowling alley, bar, grocery store, gas station, diner and delivering ice from age 12 until graduating from high school in 1937.        He served in the Army Air Corps from January 1942 to December 1945 in World War II. He was a P-47 fighter pilot stationed in Italy, and later flew C-47 transport planes in Europe and South America; the only plane he thought fun to fly was the PT-17 Trainer, a yellow bi-wing plane. He met his first wife, Christie Mann Keene, a nurse, during World War II. They were married 57 years until her death in February 2003.        After the war, he obtained a BS from Rutgers University and an MS from Columbia University. He was a hospital administrator in New York and New Hampshire before obtaining a master's in theology from Episcopal Theology School in Cambridge, Mass. John was ordained a priest in December 1958 at Trinity Church, Rockland, Mass.        A lifelong advocate for the marginalized and voiceless, he walked alongside Ralph Abernathy and others in the rain during the civil rights peace march in Selma, Ala., in 1965.        He served as priest in charge at churches in Massachusetts, New York, Tennessee and Delaware. He retired in 1983 and was interim priest in churches in the Diocese of North Dakota, Eagle Butte at an Indian reservation, in Delaware and Texas. In 1997 John and Christie moved to Fort Worth and joined St. Christopher Episcopal Church where John was a supply priest for 18 months.        In November 2008 John came out of retirement to serve as interim priest for the Episcopal Church in Parker County, a congregation formed from three Episcopal parishes whose buildings were occupied by people who left the Episcopal Church. He was at the altar the first Sunday after the split and the whole next year, retiring again at 89. He baptized and married all six of his children and baptized all 12 grandchildren.        He was predeceased by his first wife, Christie Mann Keene; brothers, Thomas and Richard Keene; parents, Thomas and Hazel Keene; and stepson, David H. Cline Jr.        Survivors: Wife, Jeanneane L. Keene; children, Judith Keene, John Keene Jr., Patricia Keene, Douglas Keene and wife, Sally, Laurie Behr and husband, Donald, and Lisa Lucas; stepsons, Marc Cline and wife, Adriana, Randall Cline and wife, Micki, and Gary Cline and wife, Jackie; brother, Larry Keene and wife, Jean; 12 grandchildren; two great-grandchildren; nieces, nephews; and the entire Episcopal Diocese of Fort Worth, whom he served as priest, mentor, beloved thorn-in-the-side and hero.

LAKESIDE -- John Keene, 90, an Episcopal priest, died Thursday, May 26, 2011, in the arms of his wife, Jeanneane, at a hospice in Fort Worth.        Memorial service: 1 p.m. Saturday, June 4, with Honor Guard at St. Christopher Episcopal Church,... View Obituary & Service Information

The family of John Keene created this Life Tributes page to make it easy to share your memories.