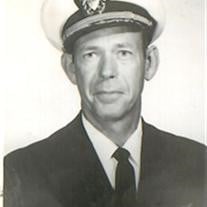 HALTOM CITY -- John "Johnny" Vaughan, a retired Federal Aviation Administration chief inspector for over 35 years, died Tuesday, Aug. 2, 2011, at 8:30 p.m. peacefully at his home at the age of 94. Funeral: 9:30 a.m. Monday at Lucas Funeral Home, 1321 Precinct Line Road in Hurst. Interment: Bluebonnet Hills Memorial Park in Colleyville. Visitation: The family will receive friends 2 to 4 p.m. Sunday at the funeral home. Mr. Vaughan was born in Mart, near Waco. He learned to fly at Congressional Airport in Rockville, Md., in 1937. He flew at the end of the barnstorming era. In 1940, he joined the Civil Aeronautics Authority, the forerunner of the Federal Aviation Administration. Mr. Vaughan also was a naval aviator and attained the rank of full commander. He served on active duty for four years in World War II and two years in the Korean War. He received various medals. He served as an FAA inspector in the Vietnam War theater of operations. Johnny was a proud American and a patriot to his country. He retired as chief inspector at Meacham Field in 1972 and made his home in Fort Worth. During his flying career, he flew around the world. Mr. Vaughan was a member of the Quiet Birdman and The Elks Lodge. He was instrumental in forming the Flight Standard Retiree Group, which has members worldwide. He was a devout member of St. Michael Episcopal Church and a member of Diamond Oaks Country Club for over 42 years. He was most proud of becoming the oldest Master Mason in Texas at the age of 92. He was a member of Haltom City-Riverside Lodge A.F. and A.M. #1331. He completed his apprenticeship Feb. 12, 2008, Fellow-craft on Aug. 19, 2008, and was raised to Master Mason on Nov. 20, 2008. He became a 32nd degree Scottish Rite on March 20, 2010, and a member of the Legion of Honor, Moslah Shriners, on March 11, 2010. Survivors: Patsy Vaughan, spouse of five years, of Arlington; sons, John T. Vaughan, retired Navy, HMC (FMF), of Bremerton, Wash., and Michael H. Vaughan of North Richland Hills; daughter-in-law, Jodene M. Vaughan of Bremerton; grandchildren, John J. Vaughan, Rosalie M. Vaughan, Zachary M. Vaughan (BU1/USN) and Jacob H. Vaughan; and nine great-grandchildren.

The family of John Vaughan created this Life Tributes page to make it easy to share your memories.