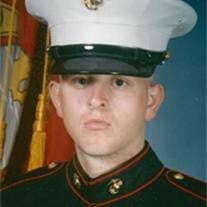 ARLINGTON -- Kevin Scott Huitt,24 of Arlington, followed the Lord on July 2, 2010.        Funeral service will be 12:30pm Friday, The Church on Rush Creek, 2350 S.W. Green Oaks Blvd. Military Honors will follow at 3:30pm at D/FW National Cemetery.        Born on January 31, 1986 in Grand Prairie, TX. Corporal Huitt honorably served his country as a United States Marine with 1st Tank battalion Bravo Company in 29 Palms California from 2005 to 2009, answering the call of duty in Iraq. Kevin loved life and had a wonderful sense of humor and a sweet spirit. Kevin enjoyed movies, music, computers, and good times with family and friends. He was a loyal son, brother, and friend who is dearly loved and cannot be replaced in our hearts. There will never be another like him.        He is survived by his parents, Wayne and Jennean Huitt; brothers, David and Matthew of Arlington, TX, grandmother, Beauton Huitt of Shreveport, LA as well as several aunts, uncles, cousins, and friends.

The family of Kevin Huitt created this Life Tributes page to make it easy to share your memories.