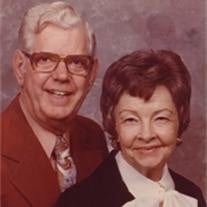 FORT WORTH -- Lanell Cullender Krauss, 96, made a peaceful transition Sunday evening, Jan. 13, 2008. Service: 1 p.m. Friday in the cemetery with the Rev. Kyle Roberson, associate minister at University United Methodist Church, officiating. Following prayers, Lanell will be laid to rest next to her husband, Joseph, in Greenwood Memorial Park. Memorials: Consideration of contributions to a charity of one's choice, in Lanell's name, is suggested. Lanell was the oldest of three children, born in Chico in 1911, to Henry Lamar and Eula Cullender. She moved to Fort Worth when she was 8 and resided there for the remainder of her life. She was a longtime member of University United Methodist Church. Mimi, as she was known to her grandchildren, was a family oriented homemaker, who enjoyed sewing, cooking and taking care of her grandchildren. She was married for 55 years to Joseph Krauss, who died in 1989, and mother of the late Gail Duckworth, who was born in 1934 and died in 1999. Survivors: She will be missed by her granddaughters, Susan Stephenson and Sharon Etherington; and her great-grandchildren, Shanna Etherington, Rachel, Stephenson, Ian Etherington, Kelsey Stephenson and Colin Stephenson. Robertson Mueller Harper Funerals & Cremations 1500 Eighth Ave., 817-924-4233

The family of LANELL KRAUSS created this Life Tributes page to make it easy to share your memories.

FORT WORTH -- Lanell Cullender Krauss, 96, made a peaceful transition...