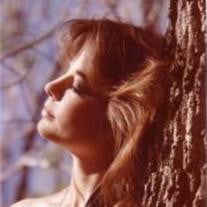 FORT WORTH -- Laura Ilene Gudat Brooks White, 45, a loving mother, grandmother, daughter, sister and aunt, died peacefully Monday afternoon, June 11, 2007, at her home after a courageous battle with cancer, surrounded by her loving family. Celebration of life: 2 p.m. Thursday in the chapel at Robertson Mueller Harper. The Rev. Lawrence M. Hammond will officiate. Burial: Laura will be laid to rest in Greenwood Memorial Park. Bearers of her casket will be Kyle Boose, Grayson Garland, Tyler Jenkins, Tim Manske, Cody Martin, Sini Rakanovic, Ryan Stovall and Ryan Weingart. Memorials: Consideration of contributions to the Susan G. Komen Foundation for the Cure or to the American Cancer Society, in memory of Laura, is suggested. A native and lifelong resident of Fort Worth, Laura Ilene was born Aug. 16, 1961. She was a 1979 graduate of Southwest High School and became a licensed vocational nurse after attending the Harris School of Nursing. In addition to her nursing skills, Laura was a seven-year officer with the Fort Worth Police Department. Her interests included scuba diving, baking and arts and crafts. She was consummate entertainer who enjoyed "putting on the party!" There is always someone in a group, crowd or family who has special spark or energy when they are around or in a room. For her family, and to anyone lucky enough to meet her, Laura brought that special something that made the air in the room seem a little lighter. Whether it was with one of her games or jokes, she always tried to make people smile and laugh, and almost always succeeded. Laura was a loving and devoted mother who wanted the best for her children and family. For all of those whom she precedes in death, you will miss the good times, food and fun, but know that she's forever in your heart and soul. All good things come to an end, but that doesn't mean they will be forgotten. Survivors: Children, Gerade Telesko and his father, Dan, Samuel J. Brooks and his wife, Valerie, and Alan Brooks and their father, Blake, and Brianna White and her father, Eric; grandson, Benjamin Brooks; mother, Charlsa Sarvis; father, Paul Gudat and his wife, Jo; siblings, Carole Roszell and her husband, Clay, Jill De La Cruz and her husband, Michael, Annett Pool, Robert Parker and Jud Parker; and several nieces and nephews.Robertson Mueller Harper Funerals & Cremations 1500 Eighth Ave., 817-924-4233

The family of LAURA WHITE created this Life Tributes page to make it easy to share your memories.