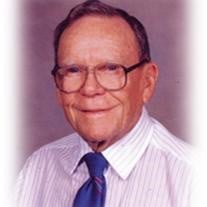 FORT WORTH -- Lee Weldon Garner died peacefully Monday morning, Feb. 6, 2012, during his 97th year, at a Grandview care center. Service: 2 p.m. Thursday in Laurel Land Memorial Park with the Rev. Verne Fuqua of Arborlawn United Methodist Church officiating. Visitation: He will lie in state Wednesday at Robertson Mueller Harper, where family and friends will gather 4 to 6 p.m. in the Great Room. Memorials: In lieu of flowers, consideration of contributions to the Alzheimer's Association or a charity of one's choice, in Lee's memory, is suggested. Born in Grandview on May 21, 1914, Lee was the son of Morris Elmer and Ada Rena Hughes Garner. He graduated from Grandview High School and married Oleta Mae Smyth in 1934. In 1943, Lee and the family moved to Fort Worth where they were members of St. Paul United Methodist Church. He worked for General Dynamics and retired from the home improvement department at Leonard's. He was preceded in death by his parents; wife, Oleta, who died in 2001; and daughters, Sylvia Ann Greene and Jeannie Ruth Griffin. Survivors: In addition to his son, Morris of Fort Worth, Lee is survived by his daughter, Jill Tomlinson and her husband, Ron, of Fairview; grandchildren, Chris A. Tomlinson and his wife, Carrie, Scott Tomlinson and his wife, Ellen, Greg Tomlinson, Deanna Bublik and Amy Marshall and her husband, John; 12 great-grandchildren; and one great-great-grandchild. Robertson Mueller Harper Funerals & Cremations 1500 Eighth Ave., 817-924-4233

The family of LEE GARNER created this Life Tributes page to make it easy to share your memories.