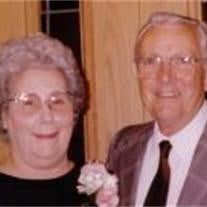 FORT WORTH -- Leon Elmo and Willie Ruth Cornelius went to be with the Lord on Monday, Oct. 15, 2007. Funeral: 10:30 a.m. Thursday in the chapel at Robertson Mueller Harper. The Rev. Bill Warren will officiate. Following services in the chapel, Elmo and Ruth will be laid to rest in Laurel Land Memorial Park. Visitation: The couple will lie in state Wednesday in the Great Room at the funeral home, where their family will receive friends 6 to 8 p.m. Memorials: Consideration of contributions to the American Cancer Society or the Alzheimer's Association of North Texas, in memory of Elmo and Ruth, is suggested. Elmo and Ruth were married Dec. 10, 1966. Elmo was born Oct. 9, 1922, in Caddo Mills. Ruth was born Sept. 19, 1921, in Waxahachie. Elmo served his country in the U.S. Navy during World War II. He was a skilled woodworker all of his adult life, a trade he dearly loved. He was the owner of Bomex Products Co. and retired in 1984. Elmo loved to fish and could spend hours on the lake; on special occasions, he would take his grandchildren with him. His love for Ruth was immeasurable and he loved to give her the best of the best. Ruth was an accountant with the Texas State Board of Medical Examiners and retired in 1973. She loved to sew and knit for her grandchildren and great-grandchildren. She also made clothes for the neo-natal unit at John Peter Smith Hospital. Bringing joy to others was her special gift. Ruth loved to send cards, call or e-mail friends with a joke and pray for others. Prayer and positive thinking were such a big part of her life. She loved hearing stories of people and the miracles God has performed. Their grandchildren and great-grandchildren were the joy of their lives. The grandchildren have treasured memories of the times they spent at their house at Cedar Creek Lake. The swimming hole, playing wiffle ball and fishing before dawn are among their favorite memories. Elmo and Ruth enjoyed watching their great-grandchildren and great-great-grandchild grow throughout the years. Survivors: Their children, Kaye Hobbs and her husband, David, and Gayle Roberts and her husband, Terry all, of Fort Worth, Glen Cornelius and his wife, Chloe, of Granbury and Alicia Rivers of San Angelo; grandchildren, Bryon Hobbs, Jeffry Hobbs, Darin Hobbs, Angela Wood, Gina Trammel, Marsha Brown, Kimberly Porter and Brandon Rivers; 13 great-grandchildren; and one great-great-grandchild. Ruth is also survived by her sisters, LaVerne Maresh of California and Yvonne McNeil of Oregon. Robertson Mueller Harper Funerals & Cremations 1500 Eighth Ave., 817-924-4233

FORT WORTH -- Leon Elmo and Willie Ruth Cornelius went to be with the Lord on Monday, Oct. 15, 2007. Funeral: 10:30 a.m. Thursday in the chapel at Robertson Mueller Harper. The Rev. Bill Warren will officiate. Following services in the chapel,... View Obituary & Service Information

The family of LEON CORNELIUS created this Life Tributes page to make it easy to share your memories.

FORT WORTH -- Leon Elmo and Willie Ruth Cornelius went to be...