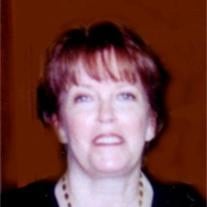 BENBROOK -- Linda Flittner Holding, 61, a loving wife, mother and grandmother, died Sunday afternoon, Dec. 7, 2008.        Funeral: 1 p.m. Friday in the chapel at Robertson Mueller Harper. The Rev. Dann Baker, chaplain at John Peter Smith Hospital, will officiate. Following committal services, she will be laid to rest in Dallas-Fort Worth National Cemetery. Visitation: Linda will lie in state Thursday in the Parlor at Robertson Mueller Harper; her family will receive friends 5 to 7 p.m. in the Great Room.        Memorials: Consideration of contributions to the UNT Health Science Center, Psychiatry Foundation, in Linda's memory is suggested.        A native of Altadena, Calif., Linda was born June 29, 1947, the daughter of Fred and Joyce Grote Flittner. After a brief, six-week courtship, she married J.C. Holding on Sept. 22, 1967, in Denver, Colo.        Linda, J.C. and their children, Lisa and Greg, moved to Benbrook in 1987. She was the consummate "stay-at-home mom," devoted to her children, tending to their needs while her husband traveled during his tour in the Air Force and later with his work.        Once her children were raised and left the nest, Linda began a 16-year career with John Peter Smith as a secretary and working her way to the position of residency coordinator for the hospital.        In addition to her father, she was preceded in death by a grandson, Wesley Holding.        Suriviors: Linda is survived by her husband of 41 years, J.C.; her children, Lisa Holding Johnson of Fort Worth and Greg Holding and his wife, Katie of Austin; her grandchildren, Jordan Johnson and Ryleigh Holding; mother, Joyce Grote Flittner; sisters, Diane Flittner McCoy and her husband, Harold, Sheri Flittner Fredricksen and Debbie Flittner; and several nieces, nephews and extended family. Robertson Mueller Harper Funerals & Cremations 1500 Eighth Ave., 817-924-4233

The family of LINDA HOLDING created this Life Tributes page to make it easy to share your memories.