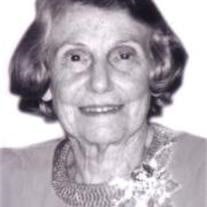 FORT WORTH -- Lynn Foster Cranz, a loving mother and grandmother, died peacefully Thursday afternoon, March 29, 2007, in her 99th year. Memorial service: 11 a.m. Monday at St. Andrew's Episcopal Church, Tenth at Lamar streets. The Rt. Rev. Jeffrey N. Steenson, bishop of the Episcopal Diocese of the Rio Grande, will officiate. Burial: Following a private committal service, Lynn will be laid to rest next to her husband, Gus, in Greenwood Memorial Park. Memorials: Consideration of contributions, in lieu of flowers, to the Salvation Army or a charity of choice in memory of Lynn is suggested. Lynn was born in Houston on Sept. 7, 1908, the daughter of Dr. and Mrs. John H. Foster. She graduated from the Hockaday School in Dallas and Rice University, where she met her future husband, Gustav Edmund Cranz Jr., who died in 1963. Mrs. Cranz resided in Fort Worth for the remainder of her life. A devout Episcopalian, she joined St. Andrew's Church in 1932 and for the entire active part of her life, was very involved with church activities, serving in St. Hilda's Guild and as acolyte mother. She was also quite active in the arts, supporting the opera, ballet, symphony, Van Cliburn and the local museums. She and her husband were members of the founding body of the Fort Worth Historical Society, where he served several terms as president. Mrs. Cranz also loaned her talents and interest to the Fort Worth Garden Club, the Junior League of Fort Worth and the Jewel Charity Ball. She was a member of the Fort Worth Club and River Crest Country Club. In addition to her husband and parents, Lynn was preceded in death by her son, Gustav Edmund Cranz III. Survivors: Son, John Foster Cranz and his wife, Rose Anne Toppin Cranz; grandchildren, Catherine "Kelly" Cranz Scott and Cynthia Jane Cranz, all of Fort Worth, and Laura Foster Cranz of New York City, N.Y.Robertson Mueller Harper Funerals & Cremations 1500 Eighth Ave., 817-924-4233

The family of LYNN CRANZ created this Life Tributes page to make it easy to share your memories.

FORT WORTH -- Lynn Foster Cranz, a loving mother and grandmother,...