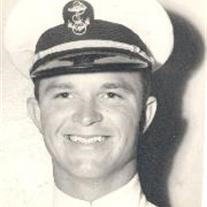 ??? Lawrence was born April 18, 1924, in Dallas to Lawrence W. Culver Sr. and Annie Marie Ross Culver. They moved to Fort Worth in 1940, where he attended Carter-Riverside High School, graduating in 1942. He fought in the novice division of the Golden Gloves and won the welterweight title. While in high school he met his future wife, Doris Nell Hunt. They were married on May 9, 1944. ??? In 1942, he was accepted as a cadet in the naval air program and was sent to the University of Texas at Austin. In March 1943, he was sent to Baylor University for flight training, after which he was sent to the University of Georgia and on to Memphis, Tenn. Lt. j.g. Culver received his wings in November 1944. He was a World War II veteran, stationed on the aircraft carrier Belleau Wood as a Hellcat fighter pilot and squadron leader, and was recognized for never having a wave-off in carrier landings. While in the Navy, he won the welterweight boxing championship while in Pensacola. ??? Upon his discharge from the service in November 1945, Lawrence went to work at the Fort Worth Star-Telegram as a photo engraver and retired in 1982 as manager of the plate-making and color departments. ??? Lawrence was an avid sportsman who especially enjoyed hunting and fishing. He excelled in many sports during his youth, and was a passionate participant in the varied activities of his children and grandchildren. ??? He was preceded in death by his parents. ??? Survivors: Doris, his wife of 61 years; sons, Lawrence Wesley "Wes" Culver III of Euless and his wife, Juli, and William R. "Bill" Culver of New Braunfels and his wife, Judy; daughters, Mary Ann Biebighauser of North Richland Hills and her husband, Mark, Linda D. Mayer of Irving and her husband, Alan; 14 grandchildren; 26 great-grandchildren; brother-in-law, James Hunt and wife, Linda; cousin, friend and confidante, William "Bill" Hartman; and many other cousins. Memorials: Anyone wishing to make contributions, in lieu of flowers, please send them to World War II Veterans Memorial in Washington D.C., the American Heart Association or the Diabetes Association.

??? Lawrence was born April 18, 1924, in Dallas to Lawrence W. Culver Sr. and Annie Marie Ross Culver. They moved to Fort Worth in 1940, where he attended Carter-Riverside High School, graduating in 1942. He fought in the novice division of... View Obituary & Service Information

The family of Lawrence Culver, created this Life Tributes page to make it easy to share your memories.