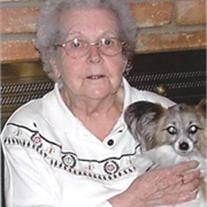 HURST -- Lillian (Champagne) Bombardier, passed away Tuesday, April 5, 2011. FUNERAL MASS: 1 p.m. Monday at St. John's Catholic Church, 7341 Glenview Dr. in North Richland Hills. Visitation: The family will receive friends Sunday 5 to 7 p.m. with a Rosary starting at 7p.m. in the chapel of Lucas Funeral Home, 1321 Precinct Line Rd.in Hurst. Lillian will be laid to rest next to her husband, Walter, in the Notre Dame Cemetery in South Hadley, MA. Memorials: You may honor her memory with a donation to Catholic Charities. Born May 15, 1914 in St. Gabriel de Brandon P.Q., Canada, the family moved to the United States and settled in Massachusetts where Lillian became a U.S. citizen in March of 1941. She married Walter Bombardier on July 4, 1935. After 47 years of marriage, he preceded her in death in January 1982. A devout and devoted life-long Catholic, Lillian was a wonderful homemaker, raising her five children and then caring for her mother in her home for the last 10 years of her mother's life. The final five of those years, Lillian also took in her mother's brother until their deaths at 96 and 102 respectively. Her life was a strong example of caring for others which her son and daughters learned and extended to her in her later years. She was deeply loved by them.SURVIVORS: Son, Fernand W. Bombardier and wife Dora of Hurst, TX; daughters, Jeanne Riggs and her husband Walt of Grand Prairie, TX, Louise McClaren and her husband Donnie of Handley, TX, Irene Laney and her husband Micheal of Grandview, TX., Mary Ann Morneau and her husband Arthur of New Britain, CT.; 13 grandchildren, 23 great-grandchildren, and 5 great great-grandchildren.

The family of Lillian Bombardier created this Life Tributes page to make it easy to share your memories.