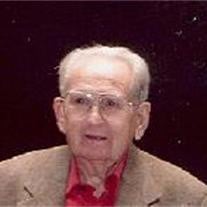 Loren Dale Wier, known to everyone as Dale, was born Jan. 1, 1919, in Prairieville near Mabank. After graduating from Mabank High School, he came to Fort Worth in 1937 and began in the grocery business, sacking, stocking and checking at Hill's Grocery on 25th Street. He married Alleita Davis in 1940 and served in the U.S. Navy from 1942 to 1945. In the Navy he was an aircraft machinist's mate first class, stationed in Grand Prairie at the naval air base. Upon release from the Navy in November 1945, he purchased Peugh's Grocery on 21st Street and Prairie Street, and it became DALE'S Grocery. DALE'S became an "institution" on the north side, noted for his hamburgers, chili-cheese burgers, barbecue and loving friendship. Everyone knew Dale, and Dale knew everyone. He cared for so many people in so many ways, always exhibiting the Gospel of Christ's love and message. After 27 years he sold the store contents in 1972 and stayed in the "meat business" for another 17 years working with Deen Wholesale Meat Co. ??? Even more significant than his business was Dale's contributions to his church, Trinity United Methodist Church of Fort Worth, and his community. At Trinity, Dale taught Sunday school for 50 years and held every volunteer lay position within Trinity UMC, as well as singing in the choir. He served as a conference representative to the Methodist Children's Home in Waco. He later was a member of River Oaks United Methodist Church, Fort Worth, Plymouth Park United Methodist Church, Irving, and Granbury First United Methodist Church. ??? Community involvement was important to Dale as he was an active member of the North Side High Steer Club for 20 years, serving as president in 1957-58 and again 1970-71. A highlight to Dale's life began in 1984 when he and a few other Christians saw the need for an organization to help the less fortunate on the north side. They conceived and established a board for the North Side Inner Church Agency. He spent many days collecting food and other goods for distribution. This agency's present motto is, "Breaking the cycles of hunger and poverty by providing food, clothing and opportunities for families and individuals in need." After serving on the board of directors since its inception, he was honored in recent years to be named as board member emeritus. Dale always cared for other. He always wanted to help. He always showed God's love through his life by caring and giving. He had always been and will continue to be, as his headstone states, a faithful "Servant of the Lord". ??? He was preceded in death by his loving wife of 59 years, Alleita Davis Wier; parents, Mayme Leona and Lonnie Boyd Wier; brother and sister-in-law, Glenn Boyd and Jennie V. Wier; brothers-in-law, Jesse E. Gooch and L. Hollis Davis; and sisters-in-law, Jimmie Wier and Inez Davis Race. ??? Survivors: Very blessed daughter and son-in-law, Joan Gayle Wier Youngblood and Billy Jack Youngblood of Granbury; granddaughters, Gayle Lynn Youngblood Padgett and husband, David L. Padgett, of Spring and Lana Michele Youngblood Hale and husband, Stephen R. Hale, of Sulphur Spring; great-grandchildren, Laci Gayle McGee and Brooke Taylor McGee of Lewisville and Ty Stephen Hale and Allie Michele Hale of Sulphur Springs; brothers and sister-in-law, R.W. and Deen Wier of Mabank and Joe Wier of Fort Worth; sisters and brother-in-law, Lowayne Wier Gooch of Dallas and Eunice Wier and E.R. Getzendanner of Palestine; sister-in-law and brother-in-law, Val and Don Cowden of Saginaw; 13 nieces and nephews; several great-nieces and nephews; and many, many dear, loving friends.

Loren Dale Wier, known to everyone as Dale, was born Jan. 1, 1919, in Prairieville near Mabank. After graduating from Mabank High School, he came to Fort Worth in 1937 and began in the grocery business, sacking, stocking and checking at Hill's... View Obituary & Service Information

The family of Loren Wier created this Life Tributes page to make it easy to share your memories.