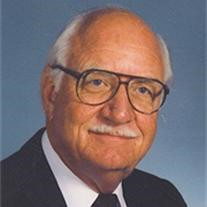 FORT WORTH -- Louie Everett Huff Sr. passed away Thursday, Feb. 7, 2008, holding the hand of his wife of 56 years. Service: 11 a.m. Tuesday in the chapel of Lucas Funeral Home, 1321 Precinct Line Rd., Hurst. Visitation: The family will receive friends 5 to 7 p.m. Sunday at the funeral home. Burial: Louie will be laid to rest at 1:30 p.m. Tuesday in Dallas-Fort Worth National Cemetery with military honors. He was born Sept. 27, 1931, in his maternal grandparents' home in Whitney. He was the first child of Robert and Birdie Foushee Huff. He grew up in the Polytechnic area until he joined the Air Force in 1951 and married the love of his life, Bobbie Eddleman, in July of the same year. The first three years of their marriage were spent in London, England, and traveling in Europe while in the service. After serving four years in the service he returned to Fort Worth with his wife and first child, Louie Jr. He attended Texas Wesleyan and graduated in three years, in 1958. In the same year he started his career in the life insurance business. He later earned his CLU degree. He worked over 13 years with Aetna Life and over 10 years with Union Central Life as regional director of agencies. Louie and Bobbie had three more children over the years, Kim, Jennifer and Rob. Family was always first with Louie. He loved his family more than anything. He was a very loving husband, father, grandfather and great-grandfather. Louie took early retirement in 1981 due to his health. Over the next 27 years Louie and Bobbie traveled to Hawaii, took a six-week driving trip to Alaska and many cruises with close friends. He also pursued his love of antique automobiles. He was a member of the Model A Club and the Buick Club. He was preceded in death by his brother, James Huff, and sister June Meacham. Survivors: Wife, Bobbie Huff; children, Louie Huff Jr. and wife, Genii, Kim Moffett and husband, Shawn, Jennifer Cairns and husband, Mel, and Robert Huff and wife, Shannon; grandchildren, Nick Cairns, Aaron Jones and wife, Amanda, Abbi Mercer, Isaiah Huff, Katy Cairns, Cheyenne Houston and Savannah Huff; great-grandchildren, Avery Cairns, Grace Jones, Rowdy Jones, Owen Mercer and Bella Mercer; and sister, Barbara Wicklander and husband, Rod.

The family of Louie Huff created this Life Tributes page to make it easy to share your memories.