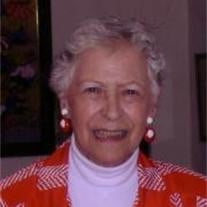 FORT WORTH -- Margot Rosenthal Schwartz, 84, a loving wife, mother, grandmother and sister, died peacefully Sunday morning, Dec. 31, 2006. Funeral: 1 p.m. Tuesday in the sanctuary of Beth-El Congregation, 4901 Briarhaven Road. Rabbi Ralph Mecklenburger will officiate. Burial: Following committal prayers, Margot will be laid to rest in the Beth-El Section of Greenwood Memorial Park. Minyan services will begin at the residence at 6 p.m. Memorials: Mrs. Schwartz's family requests that no flowers be sent. Consideration of contributions to Beth-El Congregation, the Fort Worth Symphony Orchestra Association for Student Concerts or a charity of choice in Margot's memory is suggested. A native of Cologne, Germany, Margot was born Nov. 22, 1922, the daughter of Richard and Wilhelmine Levy Rosenthal. She left Germany in 1939 during the Nazi regime with only hand luggage and a portable sewing machine. Accompanied by her mother, she traveled to Venezuela and Trinidad, West Indies, and arrived in the United States one week prior to Pearl Harbor where the two were reunited with her brother, Alfred, eventually settling in Austin. From age 17, Margot completely supported herself and her ailing mother. She worked as a dressmaker and seamstress, creating hand-made baby clothes and taught tap-dancing. While serving as a junior hostess for the J.W.B., the Jewish branch of the USO, she met the man of her dreams, Paul Schwartz, a young cadet stationed in San Marcos. The couple were married April 3, 1944. In 1950, they moved to Fort Worth where Margot became actively involved in several engineers' wives organizations, serving on their boards and as president. She was also active in the National Council of Jewish Women and took great joy in Beth-El Congregation's life and its Sisterhood, of which she served as president from 1967 to 1969. Symphony League activities were most meaningful and close to her heart. Her family always took priority; she was so proud of her husband's and children's accomplishments. After Paul's retirement, the couple started to travel and take time out for relaxation and fun. Besides art, music and cultural events, Margot loved sharing their home with friends and family. She loved dancing, arts and crafts and cooking and entertaining. Survivors: Husband of 62 years, Paul Schwartz of Fort Worth; son, Richard Lloyd Schwartz and his wife, Pylar Pinkston of Plano; daughter, Faye Lynn Schwartz Slater and her husband, Gary of Fort Worth; grandchildren, Benjamin and Melanie Schwartz, Dr. Melissa Chud Rubenstein and her husband, Jonathan, Heather Chud Grosman and her husband, Eric, Kayla Slater and Kyle Slater; brother, Alfred Rosenthal of Silver Spring, Md.; several nieces and nephews; and a host of friends. Robertson Mueller Harper Funerals & Cremations 1500 Eighth Ave., 817-924-4233

The family of MARGOT SCHWARTZ created this Life Tributes page to make it easy to share your memories.