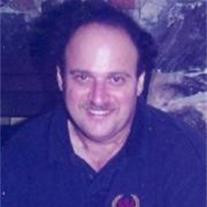 WICHITA, Kan. -- Martin Gerald Klein, 55, died Friday, May 11, 2007, after a courageous battle with cancer. Funeral: 1 p.m. Monday in the Rashti Chapel at Congregation Ahavath Sholom, 4050 S. Hulen St. Rabbi Alberto "Baruch" Zeilicovich and Dr. Javier Smolarz, ritual director, will officiate. Burial: Following committal prayers, Martin will be laid to rest in Ahavath Sholom Cemetery, 411 N. University Drive. Memorials: Consideration of contributions, in lieu of flowers, to the American Cancer Society or to a charity of one's choice, in memory of Martin, is suggested. A native of Vineland, N.J., Martin was born July 21, 1951, the son of Joseph and Elaine Nathan Klein. At the age of 11, he moved with his family to Del City, Okla., then to Rochester, N.Y. In 1967, they moved to Fort Worth where his father was an avionics engineer with General Dynamics. Martin graduated from Southwest High School in 1969 and subsequently attended night classes at Tarrant County Junior College to earn an associate's degree in science. The majority of his career was spent in the aviation-related industry, including an overseas project in the Far East with General Dynamics. He became an expert airframe and power (A&P) technician, working at a number of sites around the United States. Martin then moved to Kansas in 1998 where he was employed for several years with Cessna Aircraft. His most recent position was as an instructor at Cowley Community College in Wichita. Martin always strived to go beyond the norm in the quality of his work, whether in the teaching of theory or in the mechanical hands-on environment. He was held in high regard by friends and co-workers. Survivors: Daughter, Heather of Mineola, Kan.; parents, Joe and Elaine Klein of Fort Worth; brothers, Steven Klein and his fiancee', Fidelia Ng of Los Angeles, Calif., and Kenneth Klein Klein of Wichita, Kan.; and cousin, Sandy Elson of Thousand Oaks, Calif.Robertson Mueller Harper Funerals & Cremations 1500 Eighth Ave., 817-924-4233

The family of MARTIN KLEIN created this Life Tributes page to make it easy to share your memories.