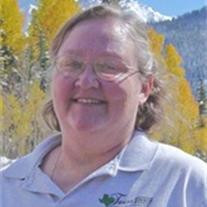 FORT WORTH -- Patrice Boyd Dean, 57, died peacefully Monday morning, Jan. 14, 2008. Funeral: A Mass of Christian Burial will be celebrated at 11 a.m. Friday at St. Boniface Catholic Church in Dobson Prairie. Following the Mass, Patrice will be laid to rest, with family members, in Dobson Prairie Cemetery in Palo Pinto County. Visitation: She will lie in state Thursday in the Parlor at Robertson Mueller Harper; her family will receive friends 4 to 6 p.m. in the Great Room. Memorials: Consideration of contributions to the "Educate the Children" program, in Patrice's memory, is suggested. This program is led by Father Robert Thames, a caring and unselfish advocate for the poor, who performed the marriage of Patrice to Ralph almost 30 years ago. Mail contributions to Fort Worth Catholic Diocese, in care of Hilda Flores, 800 W. Loop 820 S., Fort Worth, Texas 76108. Patrice was born to Lenora and Hermon Boyd in Kermit on Jan. 3, 1951. She enjoyed a close relationship with her five brothers and three sisters during her childhood in the El Paso company camp outside Odessa. After graduating from Odessa High School and attending classes at the local college, Patrice moved to Arlington, where she lived with her brother, Charles, and two friends. In 1975, she met Ralph Dean who attended the University of Texas at Arlington with Charles. They dated for a less than a year before Ralph graduated as a mechanical engineer and left to follow his career to West Texas and Saudi Arabia. Patrice worked at various jobs until her interest in the deaf community led her to studies in this field at a junior college in Dallas. A life-altering letter led Patrice and Ralph to become reacquainted in August 1977 and a wedding proposal on the following New Year's Eve. It took a civil wedding March 1, 1978, and a church wedding May 20, 1978, to clear the way for Patrice to accompany Ralph to Saudi Arabia for the next eight years. Their children, Kimberly, Erika and Dustin, were born in Aramco hospitals before they decided to return to their Alvarado property to raise their kids. A loving wife and wonderful mother, Patrice devoted her talents to being a homemaker until it was possible for her return to school and to complete training as an interpreter for the deaf at Tarrant County Junior College. This fulfilled a long-term goal that led to various work as an interpreter and interpreter coordinator at Goodrich Center for the Deaf. In 2004, she returned to life as a homemaker, although she continued to interpret Mass at St. Andrew's Catholic Church until her cancer diagnosis in October 2007. Patrice was a committed Catholic and participated in a number of prayer groups as a way to understand and expand her faith. Patrice was devoted to her family and treasured the time she could spend with her husband, children, mother, brothers and sisters. Aside from family gatherings, she looked forward to an annual "Sister Week" when she joined her sisters and mother for trips, late-night conversations and joint projects. A new dimension to her life was added with the birth of her first grandson to Erika and Trey Peters in February 2007. The opportunity to watch her children grow with their families and careers was cut short by a three-month battle with non-Hodgkin's lymphoma. Survivors: In addition to her husband, Patrice is survived by her children, Kimberly Dean of Rochester, N.Y., Erika Dean Peters and her husband, Trey, of San Antonio and Dustin B. Dean, stationed in Newport News, Va.; her grandson, Preston Peters; mother, Lenora Teichmann Boyd of Dobson Prairie; brothers and sisters, Michael Boyd and his wife, Barbara, Charles Boyd, Alan Boyd and his wife, Cathy, Mark Boyd and his wife, Sherry, Alfred Boyd and his wife, Martha, Cecelia Boyd Ashley and her husband, Raymond, Anna Claire Boyd Zawislak and her husband, Al, and Jennifer Boyd Latimer and her husband, Bruce; and their families. Robertson Mueller Harper Funerals & Cremations 1500 Eighth Ave., 817-924-4233

The family of MARY DEAN created this Life Tributes page to make it easy to share your memories.