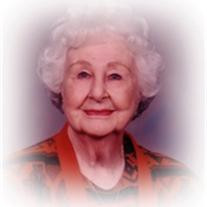 FORT WORTH -- Mary Ruth Perrin Wilkerson Bartlett died peacefully Monday afternoon, Oct. 11, 2010, during her 97th year.        Service: Following a committal service at 2 p.m. Monday, Oct. 18, Mary will be laid to rest next to her husband, Willie, who died in 1969. Visitation: Laughter and tears will be shared by family friends 12:30 to 1:30 p.m. Monday, Oct. 18, in the Great Room at Robertson Mueller Harper.        Born April 28, 1913, in Slidell, Mary Ruth was the daughter of Abner and Maude Williams Perrin. She was a graduate of Northside High School in Fort Worth.        Mary Ruth was a life member of the Church of Christ. She worked as a cashier and later as a sales associate for Monnig's Department Stores.        Following the death of her husband, Willie Wayne Wilkerson, she married Ralph Bartlett, who died in 1991. She was also preceded in death by her parents and one son, David.        Survivors: In addition to her son, James and his wife, Joy Ann, Mary Ruth is survived by her grandchildren, Gary, Mark, Pam, Rusty and his wife, Sherrie, Connie and her husband, John, and Carol Ann; and five great-grandchildren. Robertson Mueller Harper Funerals & Cremations 1500 Eighth Ave., 817-924-4233

The family of MARY WILKERSON BARTLETT created this Life Tributes page to make it easy to share your memories.