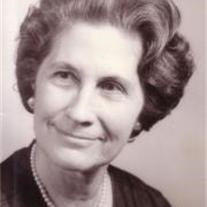 FORT WORTH -- Mayme Swihart Gilliland, 100, a beloved mother, grandmother, great-grandmother and teacher, died peacefully Tuesday evening, Jan. 2, 2007. Funeral: Services and burial will be held in Billings, Okla. Memorials: In lieu of flowers, consideration of contributions in memory of Mayme to the Lena Pope Home or a charity of choice is suggested. A native of Billings, Okla., Mayme was born July 20, 1906, the youngest of seven children to William E. and Mary Emma Thomas Swihart. She attended Columbia University in New York and received a degree in education from University Preparatory School in Tonkawa, Okla. Mayme married Erwin F. Gilliland in 1933 in Wichita, Kan., and set up home in Seminole, Okla. In 1942, the Gillilands moved to Fort Worth, where they reared two children. Known for her good nature and love of children, Mayme opened her home to the neighborhood children when her own children were growing up. She never learned to drive a car or ride a bicycle; instead she walked to her favorite places, especially the nearby museums in Fort Worth's Cultural District. Mayme was an avid reader and educator, who loved teaching beginning in the early days when she taught her first classes in a one-room country school in Tonkawa, Okla. After her husband's death in 1954, Mayme rode a bus across town to Texas Wesleyan College, where she earned her Texas teacher's certification. She taught fourth grade at Lake Worth Elementary where she was named "Teacher of the Year." Mrs. Gilliland was a longtime member of St. Andrew Episcopal Church in Fort Worth. In addition to her husband and parents, Mayme was preceded in death by her three brothers and three sisters. Survivors: Son, James F. "Jim" Gilliland and his wife, Ann, of Fort Worth; daughter, Ann Gilliland Childers and her husband, Fred, of Tucson, Ariz.; grandchildren, Conni Gilliland Davenport of Sarasota, Fla., Jeff Gilliland and his wife, Cindy, of Bedford, James F. Gilliland Jr. and his wife, Yumi, of Honolulu, Hawaii, John Berringer and his wife, Elaine, of San Antonio and Sara Berringer Bader of West Linn, Ore.; 11 great-grandchildren; and numerous nieces, nephews and former students. Robertson Mueller Harper Funerals & Cremations 1500 Eighth Ave., 817-924-4233

The family of MAYME GILLILAND created this Life Tributes page to make it easy to share your memories.