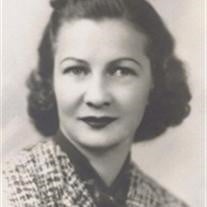 ARLINGTON -- Mabel Christman Decker, 99, passed away Saturday, Nov. 15, 2008. Mabel was born Oct. 30, 1909, in Woodsfield, Ohio, to Charles W. and Christina Pfalzgraf Christman. In 1918 at the age of 9, she moved to Arlington with her family. Mabel married Aubrey "Dick" Floyd, a professional racehorse trainer and polo player, in 1932. Together they led a storybook life, socializing with the elite polo crowd such as Gen. George Patton, R.J. Reynolds, Will Rogers and the Hershey family. During the 1950s and '60s, they prospected for oil in West Texas and uranium in New Mexico and Utah. Meeting and visiting with John Wayne on the location set during filming of The Searchers in New Mexico was just one of the many stories she loved to tell. After Dick's death in 1961, Mabel returned to Brownwood, where she stayed with a friend, Totsie McInnis. In 1962 she moved to San Antonio, where she obtained a teaching degree at Incarnate Word College and taught second grade for 12 years. While in San Antonio, she met Charles Decker and began a 35-year marriage to him. They retired to Kingsland, where Charles passed away in 1998. Mabel then moved to the Fort Worth area to be near her family. She was preceded in death by two husbands, parents, five sisters and a brother. Survivors: Two stepdaughters and many nieces, nephews, grandnieces and grandnephews.

The family of Mabel Decker created this Life Tributes page to make it easy to share your memories.