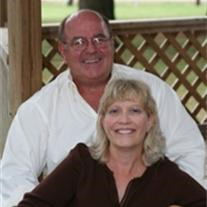 Marshall T. Vose, Jr. born September 24, 1948, passed away Saturday, August 13, 2011. Marshall is survived by his wife of 30 years, Heidi Vose; children Tiffany Vose, Shanon and Todd Null, Kristal Gortat, Seth Vose, Ashley Vose; grandchildren Christopher Tye Vose, Austyn Vose, Megan Gortat, Zakary Gortat, Crystal Stutes, Braeden Stutes, Parker Stutes, Jaxon Miller; a great-grandchild; mother Marian Vose, siblings Sheila Vose, Linda and CW Walker, Marsha and Phil Fay, Casey and Lori Vose; nieces and nephews Clint Walker, Chad Walker and family, and Danna Demma and family. Marshall was the owner of Security Mortgage Company. Marshall graduated from Cleburne High School. He received his Master’s degree from the SMU School of Banking and a Bachelor’s degree from Texas A&M in Business Administration. Marshall was a wonderful husband, father, son, brother, and friend. He made sure everyone he loved was taken care of and enjoyed when everyone was having a good time. Marshall will be truly missed and the world was a better place while he was with us.  Thoughts from Heidi Vose, wife of 30 years; I didn’t know Marshall as a child but from what I know he had an amazing childhood. He lived on a farm, participated in 4H, and showed pigs at the fair for many years. Years later as we went to the fair with our children, he’d stand in the very same stalls at the Fort Worth Stock Show and Texas State Fair and tell the same stories each year and every time we would laugh and enjoy them. He had a great singing voice. When a song played from the 40, 50, 60’s he could tell you the name and who sang it and what year.  He loved to dance and was a member and officer of the Beat 66 Dance Club for many years. Up until his death, he was still the king of The Gator although his bad knees had slowed him down. He was a hard worker from an early age. Had early jobs at Dairy Queen and moving hay bales onto railroad cars. He had strong hands. You always felt safe when he held your hand. His Mama raised him to be a gentleman... to open doors for the ladies, not to wear his hat in public and he was always a perfect hostess.   He loved parties, hated weddings but always seems to have a good time anyway. After College, he worked for SSBA in Dallas, and then moved to Lubbock and worked for Plains National Bank in the credit card department.   He was a Senior Vice President when he left there in the mid 80’s to go into the Mortgage Business which he did until his death.    We meet in Lubbock, May 4, 1981.  It was the night before my birthday and I was out with friends at the Villa Club and he was with other banker friends.  He asked me to dance several times and I told him NO.  As the evening went on, I finally gave in and danced with him. We all closed the place down; he walked us to our car and wished us a good life.   I sat there and cried because I felt like I had lost my best friend.    The next day as I sat at my desk, he saw me in the window and tried to get my attention and my thoughts were “How did he find me?”  I asked my co-worker if she knew who that was and she said he worked for the bank.  We had worked there for some time but had never met.   Then I went on my daily break and when I came back there was a note on my desk.   “Happy Birthday!”  He remembered.  I think I fell in love that minute but didn’t realize it until sometime later.   He called me and asked me to lunch. He took me to Steak and Ale and until they closed them down, we ate there each May 4th. Thru 30 years of marriage, we had our ups and down but no matter what we did it together and stayed together. When we married, Marshall had two girls; Tiffany and Kristal plus a daughter that we did not know her whereabouts, Shanon.   We had together Seth and Ashley.    I helped raise Tiffany and Kristal and to this day they are mine to be proud of.    One year ago we were lucky to find Shanon, or she found us. She turned out to be the teacher of one of grandchildren.  Marshall was so lucky to have found Shanon after all these years.   He loved to fish, he loved to go to Cabos and Vegas, he loved to play horse shoes, and loved a good cigar.  He was handy and could fix anything. He brought me my coffee every morning. He supported me in everything I did, PTA, American Red Cross and Girls Scouts. He helped raise the girls in my Girl Scout Troop like they were his own.  When I went to work for Girls Scouts he volunteered at Stevens Ranch all the time.  He helped build 2 creative playgrounds, was Ashley’s softball coach for years, and he lived for his children and grandchildren. He made every holiday and birthday an event to remember, he was romantic and would give you the shirt off his back.  He never met a stranger and always had a smile on his face.  There was never a dull moment.  Yes, he lived and he lived well. To you, Marshall, my husband and friend, thank you, for a 30 year roller coaster ride. I loved every minute of it!  I will love you forever and then some.   I refuse to say good-bye!

The family of Marshall Vose, created this Life Tributes page to make it easy to share your memories.