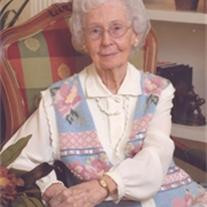 LONGVIEW -- Maurine Ann Hodson went home to be with her Lord on Friday, April 6, 2012. Funeral: 9 a.m., Saturday, April 14, at Lucas Funeral Home, Hurst. Interment will be at 4 p.m. Saturday in Altus, Okla. Visitation: 6 to 8 p.m. Friday at Lucas Funeral Home. Maurine was born April 20, 1917, in Frederick, Okla., and lived in Altus, Okla., until she married Roy A. Hodson in 1937. They then moved to Oklahoma City, where they had three sons and one daughter together. After 46 years of marriage Roy passed away and Maurine moved to Hurst, where she lived for more than 20 years. A traditional Methodist and member of St. Paul's Methodist Church in Hurst, Maurine devoted her later years to reading, studying and teaching the Bible both in her church and as a discussion leader in Bible Study Fellowship. Bible after Bible became tattered from use as she repeatedly read and studied the scriptures. Maurine was preceded in death by her beloved sisters, Maxine (her twin), and their older sister, Edna Earl. Survivors: Sons, Roy A. Hodson Jr. and wife, Shirley, of Longview, Ronald G. Hodson and wife, Barby, of Gilmer, and Robert D. Hodson and wife, Pam, of Seabrook; daughter, Judith Ann Walker and husband, Jim, of Mission Viejo, Calif.; 11 grandchildren; and 21 great-grandchildren.

The family of Maurine Hodson created this Life Tributes page to make it easy to share your memories.

LONGVIEW -- Maurine Ann Hodson went home to be with her Lord...