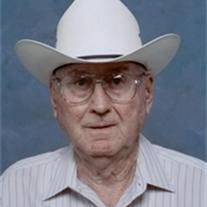 MANSFIELD -- Melvin C. Boyett, a loving father, grandfather, great grandfather, uncle and friend went home to be with his heavenly Father on Thursday, October 30,2008. Memorials: Contributions may be made to the Central Baptist Church Building Fund, 403 E. Broad Street, Mansfield, Texas 76063. Melvin was born January 22, 1919 in Mansfield Texas. He was the son of Elijah Harrison Boyett and Donnie Mae Thomas Boyett who had farmed land in Mansfield and surrounding areas. He continued farming this land as well as renting several other farms. He had farmland where the University of Texas at Arlington and Mansfield Walgreens now stand. He also worked for the City of Mansfield Water Department for several years before retiring. Melvin was a faithful member of Central Baptist Church for over 60 years where he served as a Deacon and Board Member. His pastor, Rev. Samuel Sam Rowlett who has served Central Baptist for almost sixty years was his inspiration well as one of his closest and dearest friends. The church acquired land adjacent to Walgreens and is planning to build on the exact location that Melvin used to farm. He loved his family but his passion was his love for his church and the Lord. He was always positive, had a smile on his face, and never had a negative word to say about anyone or anything. He was preceded in death by his wife of 51 years, Evelyn Boyett, wife Odessa, sister Verna Mae, brother Leslie. Survivors: Daughter Linda Ruth Henry and husband James Jim, close friend Estelle Palmer, grandchildren Jacob Jake Henry, Bill Henry and wife Laurie, Michael Henry and wife Susan, Farah Kubin and husband Brian, Kalena Turnbow, nephew George Parks and wife Carolyn, nieces Juanita Thomas, and Donna Dudley. Great Grandchildren, Justin, Melody, Ashley, Kenneth, Stetson, Coy and Kaylee. Many cousins, a loving Central Baptist Church family, and many dear friends.

MANSFIELD -- Melvin C. Boyett, a loving father, grandfather, great grandfather, uncle and friend went home to be with his heavenly Father on Thursday, October 30,2008. Memorials: Contributions may be made to the Central Baptist Church Building... View Obituary & Service Information

The family of Melvin Boyett created this Life Tributes page to make it easy to share your memories.