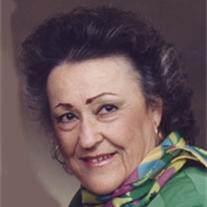 FORT WORTH -- Nancy Jean Barber Wooldridge Stevenson Deaton Hawk, 73, a loving wife, mother, grandmother, godmother, aunt, great-aunt and beloved friend to countless others, died peacefully Tuesday morning, Aug. 18, 2009.        Service: A celebration of her life will be held at 2 p.m. Saturday in the chapel at Robertson Mueller Harper. She will be laid to rest, privately, in Laurel Land Memorial Park. Visitation: Nancy will lie in state Friday, with family and friends received 6 to 8 p.m.        A true daughter of Texas with a free spirit and a zest for life, Nancy was born the youngest of six children in her parents' home, assisted by a midwife, on Feb. 17, 1936. She was the daughter of John David and Addie Bell Wells Barber. She began her life and schooling in Itasca where her father was city marshal, a position he held for many years.        Nancy's adventures began when the family moved to Fort Worth, where she met and married Billie Wooldridge. Together they had a fine son, Michael Eugene, on July 25, 1953. She later married Glenn Stevenson, with whom she had a beautiful daughter, Joanna Glynn, born Oct. 18, 1959.        Michael and Joanna were Nancy's heart and soul. She was also blessed with two beautiful grandchildren, Samantha Marie and Alex Michael.        Nancy was devoted to the Everman ISD throughout her children's school years. She was a diligent volunteer as room mother and helped create the Everman High School Athletic Booster Club in 1970. She served on the board of the club for several years.        In 1965, Nancy married Sonny Deaton. He was a great husband and a true father to Michael and Joanna until his passing in 1993. Then, in 1995, she met Kenneth Hawk. The couple married and extended the family to include Kenneth's daughter, Sharla, her husband, Robert, and their daughter, Diana. Eleven wonderful years were spent together before Mr. Hawk's death in 2006 after a short illness.        Following Michael's death in 2004, after a battle with cancer, Joanna continued to be the devoted daughter who supported Nancy throughout her life and was a loving caregiver during her final years.        The family would like to thank the staff at Community Hospice House at James L. West in Fort Worth for their exceptional care Nancy received during her stay there. They will always be grateful for the kindnesses and compassion she was shown.        Survivors: In addition to her daughter, Joanna, Nancy is survived by her grandchildren, Samantha Perez and her fiance, David Araujo, and Alex Perez; their father, Robert Perez; stepdaughter, Sharla Tesch and her husband, Bob, of Fort Worth; granddaughter, Diana Tesch; her loving godson and nephew, David Kunkel and his wife, Judy, of Houston; their children, Anna and Katie of Austin; sister, Janie Boyer of Sheridan, Ind.; special "grandson," Jon Kresena; and a host of wonderful and loving nieces, nephews and their families in Texas, Arizona, New York and Indiana.        Robertson Mueller Harper Funerals & Cremations 1500 Eighth Ave., 817-924-4233

The family of NANCY DEATON HAWK created this Life Tributes page to make it easy to share your memories.