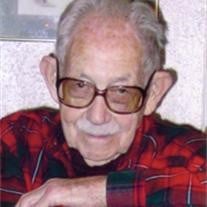 FORT WORTH -- Ned Covitt passed away peacefully Saturday afternoon, March 12, 2011, surrounded by his loving family and friends, shortly after celebrating his 102nd birthday.        Service: 11 a.m. Tuesday in the chapel at Beth-El Congregation, 4900 Briarhaven Road. Rabbi Ralph Mecklenburger will offficiate. Following committal prayers, he will be laid to rest next to his wife, Belle, in the Beth-El Section of Greenwood Memorial Park. Shiva and minyan will be held at the residence beginning at 6 p.m.        Memorials: In lieu of flowers, consideration of contributions to Beth-El Congregation or Sloan-Kettering Cancer Center, in his memory, is suggested.        A native of upstate New York, Ned was born Feb. 22, 1909. He was preceded in death by his first wife, Belle Freidman Covitt, who died in 1995.        Survivors: in addition to his wife, Avette Stenzler Covitt, Ned is survived by his son, Russell and Pat; grandsons, Sammy and David; stepson, Van and Marilyn; stepdaughter, Karen and Tom; their children, Adam and Kate, Gary, Zachary and Sara; great-grandsons, Jayden and Anton; and nieces and nephews and their families. Robertson Mueller Harper Funerals & Cremations 1500 Eighth Ave., 817-924-4233

The family of NED COVITT created this Life Tributes page to make it easy to share your memories.