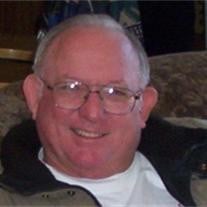 FORT WORTH -- Norman Lindsay Nickelson, 65, died peacefully Friday morning, July 11, 2008. Funeral: 10 a.m. Tuesday at St. Paul Lutheran Church, 1800 W. Freeway. Peter Couser, director of ministry, will officiate. Norman will be laid to rest in Laurel Land Memorial Park. Bearers of his casket will be J.W. Bales, Craig Coleman, Gary Nickelson, Joe Skiles, Jimmy Dent and Royce Trout. Honorary bearers will be members of the Westside Classic Cruisers. Visitation: He will lie in state on Monday in the Parlor at Robertson Mueller Harper; his family will receive friends in the Great Room from 6 to 8 p.m. Memorials: Consideration of contributions to the Diabetes Association, the American Cancer Society or to a charity of one's choice, in Norman's memory, is suggested. Born on Nov. 7, 1942, in Washington, D.C., Norman was son of Homer and Alberta Bartholomew Nickelson. He was raised in Fort Worth where he graduated from Trimble Tech High School. On Dec. 22, 1964, Norman married Nancy Beck. After serving in the U.S. Army, he returned to Fort Worth where he joined the A. Brandt Co. as a draftsman. He later worked at Martin Sprocket & Gear and LTV Corp. before associating with Corps of Engineers for 31 years. Norman was an avid car enthusiast. He and Nancy were members of the Westside Classic Cruisers as well as St. Paul Lutheran Church. His family wishes to express its appreciation to Lotus Home Health and Baylor All Saints Medical Center for their care and many kindnesses. Survivors: Norman is survived by his wife of 43 years, Nancy Beck Nickelson; son, Brian Nickelson and his wife, Candy; granddaughters, Heather and Hillary Nickelson, all of Fort Worth; uncles, Jim Bartholomew and his wife, Gloria of Michigan City, Ind., and Raymond Bartholomew and his wife, Janet of Lansing, Mich.; and numerous cousins. Robertson Mueller Harper Funerals & Cremations 1500 Eighth Ave., 817-924-4233

The family of NORMAN NICKELSON created this Life Tributes page to make it easy to share your memories.