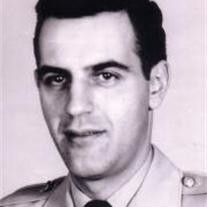 FORT WORTH -- Peter George Chaggaris, a retired U.S. Air Force major, 78, died peacefully Saturday evening, Oct. 6, 2007, at a Plano hospital. Funeral: Military honors will be held at a time be announced on Thursday, Oct. 11, in Dallas-Fort Worth National Cemetery. Memorials: Consideration of contributions to a charity of one's choice, in memory of Peter, is suggested. Peter was born Sept. 15, 1929, to George P. and Pota Chaggaris in Lynn, Mass. The eldest of three sons, he attended Brown University in Rhode Island for three years on a scholastic scholarship before completing his education at Southwestern State College, Oklahoma, where he received a bachelor of science degree with a major in physics and a minor in economics. He was a career military officer in the U.S. Air Force having served with distinction as a decorated war veteran. Peter began his military career as a nuclear weapons instructor assigned to a base in Roswell, N.M. He later advanced to a navigator of a KC-135 Stratotanker at a Strategic Air Command Base in the Midwest and was awarded the Air Force Commendation Medal. He was later assigned as a navigator of a DC-3 and served a one-year tour of duty in Vietnam, where he completed in excess of 101 combat missions. For his meritorious combat service he was awarded the Air Force's Air Medal and the Distinguished Flying Cross. He retired in 1972 as the squadron commander of the 2048th Communications Squadron at Carswell Air Force Base. Peter's second career was in real estate. In the mid 1970s, he founded a commercial real estate brokerage company that served the Tarrant County area and specialized in multi-family housing. He was noted for having brokered a number of large multi-family properties from 1975 to 1980. His real estate activities ultimately transitioned into investments and he owned and managed multi-family properties in both Hurst and Burleson until 2001. His most recent career as a wholesale art dealer was his most exciting. He had a near perfect recall of the names of lesser known yet notable artists which allowed him to rediscover otherwise unrecognized artwork. A devoted husband, caring father and loving grandfather, he will be missed by his family and friends. Survivors: His wife of 53 years, Joyce; his sons, George Chaggaris and his wife, Marianne, of Keller, and John Chaggaris of Fort Worth; his granddaughters, the apples of his eye, Leslie Chaggaris and Rachel Chaggaris; his stepgrandchildren, Jill Watts and Jenny Davis and her husband, Jeff; his brothers, Louie Chaggaris and his wife, Fran, and Chris Chaggaris and his wife, Mary, of New Jersey. Robertson Mueller Harper Funerals & Cremations 1500 Eighth Ave., 817-924-4233

The family of PETER CHAGGARIS created this Life Tributes page to make it easy to share your memories.