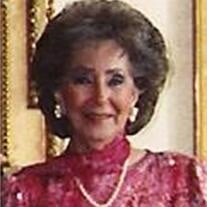 LOS ANGELES, Calif. -- Peggy Gould Davis, 82, a loving mother and grandmother, died peacefully Sunday morning, April 8, 2007, of Alzheimer's disease. Funeral: 11:30 a.m. Friday in the Beth-El Section of Greenwood Memorial Park. Burial: Following committal prayers, Peggy will be laid to rest beside her husband, Burton. Memorials: Consideration of contributions, in lieu of flowers, to the Alzheimer's Foundation of America, 322 Eighth Ave., Seventh Floor, New York, N.Y. 10001, in memory of Peggy, is suggested. Born Aug. 24, 1924, in New York City, Priscilla Thelma "Peggy" Gould grew up a lover of the arts. After graduating from high school, she joined the ranks of the administration at RKO and immersed herself in the entertainment world. Peggy moved to Fort Worth at age 22, marrying Burton D. Davis after a meeting in New York City. Mr. Davis died in 1991. She quickly involved herself in the community as an avid garden club member, active in the Sisterhood of Beth-El Congregation, where she was a member, and as a dedicated volunteer for various charitable organizations. During her early years in Fort Worth, Peggy continued her love of entertaining, performing in local stage productions. She had a long career in retail, helping out at the family business, A. Davis & Company, up until its closing after a 50-year history in the Fort Worth community. After her children were off to college, Peggy worked for 19 years as a sales associate for Foley's, retiring as a result of the onset of Alzheimer's. Survivors: Daughters, Linda Davis of Los Angeles, Calif., Michele Davis Karagianakis and her husband, Tom, of Rumson, N.J., and Laurie Davis Goldstein and her husband, Robert, also of Los Angeles, Calif.; and grandchildren, Alex Karagianakis of Rumson, N.J., and Emily and Ryan Goldstein of Los Angeles, Calif.Robertson Mueller Harper Funerals & Cremations 1500 Eighth Ave., 817-924-4233

The family of PRISCILLA DAVIS created this Life Tributes page to make it easy to share your memories.