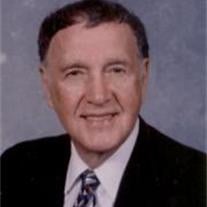 MANSFIELD -- Peter F. Gaydos surrendered to the Lord's call Wednesday, Dec. 6, 2006. Memorial service: 11 a.m. Monday at Blessing Funeral Home, 401 Elm St., Mansfield. Burial: 2 p.m. Monday in Dallas-Fort Worth National Cemetery. Memorials: Mansfield Activities Senior Center, 106 S. Wisteria, Mansfield, Texas 76063, or the Alzheimer's Association, 401 W. Sanford, Suite 200, Arlington, Texas 76011. He was born March 17, 1922, in Dixonville, Pennsylvania, to parents who immigrated from Austria Hungary. He was the last survivor of 11 children, all raised in Cleveland, Ohio. In his youth, he attended John Adams High, where he was a cheerleader and taught ballroom dancing. He graduated with honors from the University of Notre Dame and attended the University of Chicago and Harvard. Peter was honored with the Victory Medal while serving in the United States Navy as an ensign in the supply corps during World War II. His love of dancing brought him to a USO dance, where he met his wife, Norma. Pete and Norma shared a devoted 60 years together. Peter worked as an aerospace specification writer for Martin Marietta in Orlando, Fla., but spent most of his career with LTV in Grand Prairie until his retirement in 1989. He loved watching and supporting his family in all aspects of their lives, especially with their athletic careers. Peter was a witness for our Lord Jesus Christ, studying His word for over 40 years. Among other things, God's gift to him was music. He sang in barbershop quartet, church choirs including Walnut Ridge Baptist Church in Mansfield and Arlington Community Church, Mansfield Senior Center and also his assisted living home, Alterra. Pete also played the accordion, guitar and the harmonica. He will now join in song with our heavenly choir. Survivors: Peter leaves behind a very appreciative and loving family, his wife, Norma; daughter, Vicki and husband, Dennis Dowd; son, Kent Gaydos and wife, Pamela; grandchildren, David Dowd and wife, Micheline, Lori Dowd Miles and husband, Randy, and Brittany and Bryan Gaydos; great-grandchildren, Trinity, Avery, Brynn and Drake; and nieces, nephews and friends.

The family of Peter Gaydos created this Life Tributes page to make it easy to share your memories.