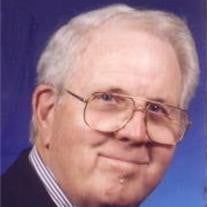 FORT WORTH -- Raymond Bryan Atherton, 82, passed away peacefully Monday morning, Oct. 29, 2007. Memorial service: 2 p.m. Thursday in the sanctuary of First United Methodist Church of Fort Worth, 800 W. Fifth St. The Rev. Dr. William Longsworth, senior associate minister of the church, will officiate. Interment: Following private committal services for the family, Ray will be laid to rest in Annetta Cemetery. Memorials: In lieu of flowers, consideration of contributions to the American Cancer Society or a charity of choice, in memory of Ray, is suggested. Ray was born in Fort Worth on Aug. 14, 1925, the son of Leonard Franklin and Winnie Davis Atherton. He served in the U.S. Navy during World War II. He participated in the first wave of the D-Day Normandy invasion on an LST transporting troops. Later, his LST hauled munitions to the Pacific theater. Ray had a 51-year life insurance business career and was co-founder of the Atherton-Kiehn Agency Inc. As a chartered life underwriter (CLU), Ray served as past president of the Fort Worth Association of Life Underwriters, past director of the Texas Association of Life Underwriters and was a member of the National Association of Life Underwriters. He was a member of the American Society of Financial Service Professionals. He attended Texas Christian University and Southern Methodist University. His other memberships and community involvement included Cooke-Peavy Lodge #1162, A.F. & A.M., Fort Worth Scottish Rite Bodies, Moslah Shrine, the Royal Order of Jesters Court #32, Ridglea Country Club, the Petroleum Club of Fort Worth, the Rotary Club of East Fort Worth, First United Methodist Church of Fort Worth, where he served as a greeter for more than 20 years, Meals on Wheels and the YMCA, where he received its Chi Rho Award. In his spare time, he loved to play golf, fish and travel. Survivors: His wife of 62 years, Dorothy Smith Atherton; daughter, Donna Atherton Johnson and her husband, Louis, all of Fort Worth; grandson, Matt Johnson and his wife, Pat; great-grandchildren, Jack, Mary and Sarah; and brothers, Samuel Atherton and Tom Atherton. Robertson Mueller Harper Funerals & Cremations 1500 Eighth Ave., 817-924-4233

The family of RAYMOND ATHERTON created this Life Tributes page to make it easy to share your memories.