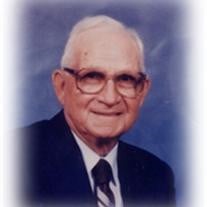 FORT WORTH -- Raymond Jesse "R.J." Teague died peacefully Monday afternoon, Jan. 31, 2011, just one month shy of his 100th year.        Service: 2 p.m. Friday in the sanctuary of University Christian Church, 2720 S. University Drive with the Rev. Dr. Alan Lobaugh officiating. Following the service, R.J. will be laid to rest next to his wife, Opal, in the Teague Family Plot in Greenwood Memorial Park. Visitation: Mr. Teague will lie in state Thursday in the Parlor at Robertson Mueller Harper, where family and friends will share laughter and tears 6 to 8 p.m. in the Great Room.        Memorials: Consideration of contributions to Camp Summit, 17210 Campbell Road, Dallas, Texas 75252, or to a charity of one's choice, in R.J.'s memory, is suggested.        Born in a log cabin near Cuba in Wise County on March 1, 1911, R.J. was the son of Oscar and Nora Franklin Teague. At the early age of 10, his mother died and R.J. was left to help raise his two younger brothers, George, age 5, and Bill, age 2. His father died in 1937. With limited resources and having only two years of formal education, R.J. learned at an early age to work hard.        At the age of 20, R.J. married Opal Smith. They had three sons and a daughter, Don, Jim, Elaine and Bob.        R.J. worked for Morrow Wrecking, Chickasaw Lumber and Sinclair Refinery before opening his own business, R.J. Teague Lumber, in 1944, on White Settlement Road. In 1949, the Trinity River crested its banks and put Teague Lumber under more than 15 feet of water, which destroyed most of its supplies. Through perseverance, hard work and the help of his son Jim, R.J. overcame the devastation and rebuilt his business. Teague Lumber has been in business for 66 years and employs three generations of family members. The success of Teague Lumber today is because of R.J.'s daily example of hard work, fairness and treating people right.        R.J. had many personal and professional accomplishments in his life, but his greatest legacy is the passion, love and unwavering faith he had in the Lord. One of his favorite verses was Romans 8:31: " _ if God is for us, who can be against us?" He was truly an inspiration to all who knew him and will be deeply missed.        He was preceded in death by his parents; beloved wife of 58 years of marriage, Opal, who died in 1988; son, Don; grandson, Jason Teague; granddaughter, Melinda Teague Spencer; and brothers, George and Bill.        Survivors: In addition to his sons, Jim and his wife, Linda, of Fort Worth and Bob of Houston, R.J. is survived by his daughter, Elaine Stogsdill and her husband, Don, of Fort Worth; grandsons, Rick Teague and his wife, Robbye, and Paul Teague and his wife, Connie, all of Fort Worth, and Randy Stogsdill and his wife, Sondie, of Benbrook; granddaughters, Robin and her husband, Mike Whalen, of Abilene, Kathy Lynch of Fort Worth and Liz Lynch of Brenham; nine great-grandchildren; and two great-great-grandchildren; special friend, Doris Sanders; and caregivers, Beverly Chapin, Sheila Hooks and Emily Palmer. Robertson Mueller Harper Funerals & Cremations 1500 Eighth Ave., 817-924-4233

The family of RAYMOND TEAGUE created this Life Tributes page to make it easy to share your memories.