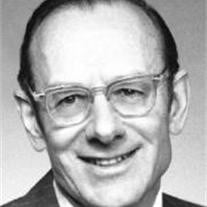 FORT WORTH -- Richard Edward "Dick" Adams, 85, a loving husband, father, grandfather and retired corporate vice president of General Dynamics Corp., passed away peacefully on Saturday morning, Feb. 17, 2007, at a local hospital, surrounded by his family following a short illness. Memorial service: 11 a.m. Wednesday at University Christian Church. Visitation: The family will receive friends in the Fellowship Hall of the church immediately afterward. Memorials: Consideration of contributions, in lieu of flowers, to University Christian Church, 2720 S. University Drive, Fort Worth, Texas 76109, or a charity of choice in memory of Dick is suggested. Dick was born in Springfield, Ohio, on Aug. 14, 1921, to Fred C. and Carrie Miller Adams. He graduated from Purdue University in 1942 with a B.S. in mechanical engineering. While working for NACA at Langley Field, Va., Dick met Grace Butler of Roseboro, N.C. They were married on Nov. 17, 1945. In the following years he worked on the nuclear energy-propelled aircraft program for Fairchild Corp. in Oak Ridge, Tenn. In 1951 Dick moved to Fort Worth to join Convair, the predecessor to General Dynamics and Lockheed Martin. While working there, he served as an engineer on several high-performance aircraft. After serving as the vice president of engineering at the Convair Division in San Diego, Calif., Dick was named the vice president and general manager of the Fort Worth Division of General Dynamics. In 1974 he was named corporate vice president of General Dynamics and elected to its board of directors. As corporate vice president he was responsible for all aerospace activities and projects. Dick received an honorary doctorate of engineering from Purdue University in 1977. He served on the boards of various civic organizations, including the Fort Worth Chamber of Commerce, Tarrant County United Way, Fort Worth Arts Council, Longhorn Council of the Boy Scouts of America, Executive Service Corporation, Carter Bloodcare and the McDonald Observatory. His public service was recognized by many Fort Worth and national organizations. In addition, Dick was a member of University Christian Church, The Exchange Club, the Fort Worth Club and River Crest Country Club. The family would like to express its deepest gratitude to the ICU nurses and staff of Baylor All Saints Hospital for their kindness, compassion and loving care. Dick was preceded in death by an infant son, Scott Starling Adams; his parents; and his brother, Fred M. "Fritz" Adams, formerly of Cocoa Beach, Fla. Survivors: His loving wife of 61 years, Grace Elaine Butler Adams; son, Win Adams and his wife, Donna; daughters, Elaine Adams Small and her husband, Terry, and Anne Adams; and grandchildren, Richard Hall, Rob Hall and his wife, Claire, Win Adams Jr., Katie Adams and Preston Hall. Robertson Mueller Harper Funerals & Cremations 1500 Eighth Ave., 817-924-4233

The family of RICHARD ADAMS created this Life Tributes page to make it easy to share your memories.