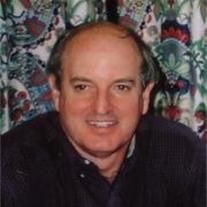 Richard was born in Harlingen on Sept. 13, 1951, shortly before his family moved to Fort Worth. The high points of his educational experience include meeting the love of his life, Lyn, in Miss Thompson's fifth-grade class at Arlington Heights Elementary School and graduation from Fort Worth Country Day School. Richard also attended boarding school at Kemper Military Academy where, he said wryly, he "learned the basics of military leadership along many future South American dictators." In 1974, he graduated from Austin College in Sherman. Like his father, a colonel in the Air Force, Richard had a lifelong fascination with aviation. He earned his pilot's license at age 15, which allowed him to fly before he could legally drive. Richard loved the outdoors, especially boating, sailing, golfing and soccer. He pursued these interests as a member of the Fort Worth Boat Club, Dallas Caddo Club and River Crest Country Club. Richard's professional life in the oil and gas industry began in Houston. After moving to Midland in 1979, he promoted exploration through Legacy Petroleum, a company he co-founded. In 1985, foreseeing the potential for the digitization of courthouse records for title work, he founded Advance Abstract and Title. This company expanded to include title plants in seven West Texas counties. After selling that company, Richard, a longtime member of the American Association of Petroleum Landmen, returned to Fort Worth in 1999 to pursue his true passion--petroleum land work. He worked as an independent landman for several years. He was excited about his most recent venture as co-founder of Fort Worth Energy, a company devoted to exploration of the Barnett Shale. Sought by others for his wise counsel, Richard was known for his integrity and sound, calm advice. He believed in serving the communities in which he lived. He served on the board of Midland County Hospital. He was an active supporter of the Hillcrest School of Midland, where he remained an honorary board member even after he moved to Fort Worth. Most recently, Richard was an asset to the Texas Boys Choir-Fort Worth Academy of Fine Arts Board. He served as board member and president during the transition of the Texas Boys Choir School into the Fort Worth Academy of Fine Arts. A devoted family man and a dutiful son, Richard will be greatly missed. He married Lyn Smith on Sept. 3, 1977. They had four children, Hallie Elizabeth, Mary Louise, Paul Richard and Sally Virginia. Richard's charitable activities and his daily life were centered around his children and their interests. From choral music to ballet to showing horses and dogs, Richard embraced his children in all of their endeavors. While Richard was a successful businessman and active community leader, he always had time for his family. His quick wit and dry sense of humor will be missed by all who loved him. Richard was the son of Rae Key Ferrell, daughter of the late Mr. and Mrs. Edmund Key of Marshall. He was preceded in death by his father, Richard Otto Dulaney, Jr.; a daughter, Hallie Elizabeth; and his sister, Marie Key Dulaney Pullen. Survivors: Wife of 29 years, Lyn Smith Dulaney; daughters, Mary Louise and Sally Virginia; son, Paul Richard; mother, Rae Key Ferrell, all of Fort Worth; sister, Nancy Key Goldring of Litchfield, Conn.; aunts, Marie Key Henley and Chris Dulaney; father-in-law, Marc B. Smith Jr. and his wife, Nancy of Fort Worth; sister-in-law, Martha Davis of Houston; brothers-in-law, Willing Ryan Smith of Fort Worth, and Grey Smith and his wife, Sawnie of Dallas; six nieces; and four nephews. Robertson Mueller Harper Funerals & Cremations 1500 Eighth Ave., 817-924-4233

Richard was born in Harlingen on Sept. 13, 1951, shortly before his family moved to Fort Worth. The high points of his educational experience include meeting the love of his life, Lyn, in Miss Thompson's fifth-grade class at Arlington Heights... View Obituary & Service Information

The family of RICHARD DULANEY created this Life Tributes page to make it easy to share your memories.