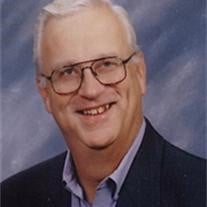 FORT WORTH -- Robert C. Oelkers passed away Monday, Jan. 7, 2008. Funeral: 1 p.m. Friday in the chapel at Robertson Mueller Harper. The Rev. Dr. Ronald K. Heimsoth of Trinity Lutheran Church will officiate. Memorials: In lieu of flowers, consideration of contributions to the Fort Worth Zoological Association, 1989 Colonial Parkway, Fort Worth, Texas 76110, Attention: Development, in Bob's memory, is suggested. Bob was born in New York City on June 21, 1944, the son of Carroll and Edith Oelkers. He married his wife, Stephanie, on March 4, 1967. Bob graduated from Pace University in 1966 and began a career with Texaco that lasted until his retirement in 2002. Following his retirement, he served as a member on the board of directors for Dynegy and Animal Health International, along with many other philanthropic organizations. Throughout his career, Bob also dedicated time to the community. He held leadership positions in United Way and many other community foundations. He devoted much of his time to building a strong foundation in the communities that he was a part of throughout his life. Although Bob was taken too early, he led a full life and leaves behind a strong family and network of friends that will continue his legacy. Survivors: In addition to his wife of 40 years, Bob is survived by his children, Christine Sullivan and her husband, Jim, Scott Oelkers and his wife, Holly, and Kathryn Oelkers; grandchildren, Trevor, Ashley, Grace, Zoe and Maxwell; sisters, Elizabeth King and Phyllis Krpata and her husband, Dan; brother, Richard Oelkers and his wife, Teresa; and many nieces and nephews. Robertson Mueller Harper Funerals & Cremations 1500 Eighth Ave., 817-924-4233

The family of ROBERT OELKERS created this Life Tributes page to make it easy to share your memories.