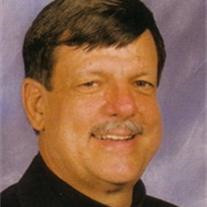 FORT WORTH -- Ronald Keith Heimsoth, 60, pastor of Trinity Lutheran Church, died peacefully Saturday afternoon, Aug. 29, 2009.        Service: A celebration of Pastor Heimsoth's life will be held 10 a.m. Wednesday in the sanctuary of Trinity Lutheran Church, 3621 Tulsa Way. Following services in Sand Springs, Okla., he will be laid to rest with his wife, Linda, in Blackburn, Mo. Visitation: Pastor Heimsoth will lie in state Tuesday at Robertson Mueller Harper where family and friends will be received 5 to 7 p.m.        Memorials: In lieu of flowers, consideration of contributions to the Oaks Indian Center, a mission to the Cherokee Nation in Oklahoma, or the Lutheran School of Theology at Chicago is suggested.        A native of Kansas City, Kan., the Rev. Ronald Keith Heimsoth, D.Min., was born Feb. 21, 1949, the son of Lawrence Gottlieb and Helena Amanda Sophia Schmohe Heimsoth. He graduated from high school in Concordia, Mo., before attending college. He entered Concordia Senior College in Fort Wayne, Ind., to pursue a course of study for the ordained ministry in the Lutheran Church and graduated with a B.A. before continuing his studies at Concordia Seminary in St. Louis. After a year's internship, Ron returned to Concordia Seminary in Exile (Seminex) where he received his master of divinity, M.Div. He earned his doctor of ministry, D.Min., from the Lutheran School of Theology at Chicago in 1988.        Pastor Ron served several churches in Oklahoma in various capacities. In 1975, he accepted a call to be pastor of St. Paul's Lutheran Church in Wellston, Okla. While there, he and the church became charter members of the AELC and remained with the church until becoming the pastor-director of a new congregation in Sand Springs, Okla. He helped organize and establish St. Andrew Lutheran Church, a congregation of the Southwest Regional Synod, AELC. Ron remained there as pastor until accepting a call from Trinity Lutheran Church in Fort Worth. He was installed at Trinity in 2002.        Over his years of ministry in Oklahoma, Pastor Heimsoth was involved in various activities of the church and the communities he served. While in Fort Worth and Texas, his memberships and participation included the Tarrant Area Council of Churches, Cattle Country Clerics and the Texas Council of Churches.        In June 1972, Ron married Linda Nienhiser of Blackburn, Mo. Their marriage brought three beautiful daughters, Bridget Helena, Catherine Marie and Andrea Lin. Linda died following a three-year battle with breast cancer Oct. 4, 1997.        Survivors: In addition to his daughters, Ron is survived by his father, Lawrence Gottlieb Heimsoth and his wife, Maxine, of Concordia, Mo.; brother, the Rev. Father Larry Gottlieb Heimsoth and his wife, Beverly, of Temple; brother-in-law, Larry Nienhiser and his wife, Frances; sister-in-law, Jeanette Nienhiser Schuette; and nieces and nephews and their families. Robertson Mueller Harper Funerals & Cremations 1500 Eighth Ave., 817-924-4233

The family of RONALD HEIMSOTH created this Life Tributes page to make it easy to share your memories.